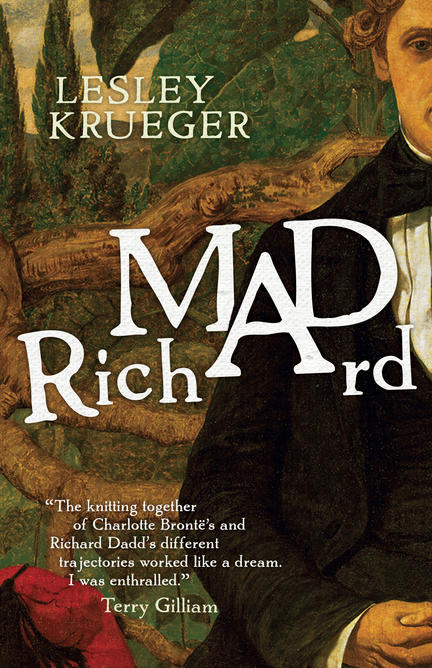 A riveting story of talent and the price it exacts, set in a richly imagined Victorian England

Called the most promising artist of his generation, handsome, modest, and affectionate, Richard Dadd rubbed shoulders with the great luminaries of the Victorian Age. He grew up along the Medway with Charles Dickens and studied at the Royal Academy Schools under the brilliant and eccentric J.M.W. Turner.

Based on Dadd’s tragic true story, Mad Richard follows the young artist as he develops his craft, contemplates the nature of art and fame — as he watches Dickens navigate those tricky waters — and ultimately finds himself imprisoned in Bedlam for murder, committed as criminally insane.

In 1853, Charlotte Brontë — about to publish her third novel, suffering from unrequited love, and herself wrestling with questions about art and artists, class, obsession and romance — visits Richard at Bedlam and finds an unexpected kinship in his feverish mind and his haunting work.

Masterfully slipping through time and memory, Mad Richard maps the artistic temperaments of Charlotte and Richard, weaving their divergent lives together with their shared fears and follies, dreams, and crushing illusions.

Lesley Krueger is a novelist and screenwriter. Richard Dadd’s first cousin-in-law five times removed (if she has the genealogy right), Lesley drew on family information unknown to biographers in writing Mad Richard. The author of six books, she lives with her husband in Toronto where she’s an avid member of a women’s hockey league and a writer-mentor at the Canadian Film Centre. Find her online at LesleyKrueger.com.

Screenwriter and novelist Krueger (The Corner Garden, 2003, etc.) uses her visual artistry to good effect in vividly portraying a squalid London in which talent doesn't always lead to fame or fortune. Exploring the vibrant cultural awakenings of the Victorian age, Krueger intriguingly populates her scenes with the artistic glitterati of the day . . . An entrancing portrait of artistic minds confounded by the Victorian Age.” — Kirkus Reviews

“Krueger’s research is evident in every paragraph: from the use of authentic slang to richly sketched portraits of the lives of the era’s rich and poor, the book confidently transports the reader to another time.” — Quill & Quire

“The knitting together of Charlotte Brontë’s and Richard Dadd’s different trajectories worked like a dream. I was enthralled.” — Terry Gilliam

“In this remarkable piece of historical fiction, Krueger (Drink the Sky) imaginatively delves into the life of Richard Dadd . . . The two story lines . . . effectively juxtapose Dadd and Brontë, two very different people who travelled in similar circles during the same era and, more importantly, who were both entirely invested in what it means to be an artist. This question anchors the novel, adding depth and dimension to a terrific read.” — Publishers Weekly, starred review

“A wonderfully elegant novel that led me back to rereading Jane Eyre and a first time go-around with her other two noted novels, Shirley and Villette, this one enthralled me.” — Owen Sound Sun Times

An intriguing idea...linking not only the author Charlotte Bronte and artist Richard Dadd, but adding other literary and artistic characters of their times (Charles Dickens, for example) in a thoughtful study of art, love, madness and life itself. Moving between Richard's and Charlotte's stories, one becomes completely engrossed in what is happening on the page. Their lives are portrayed with much detail and I loved that the story followed the biographical events of their lives. A very well written (and researched), complex and enjoyable book.

Other titles by Lesley Krueger