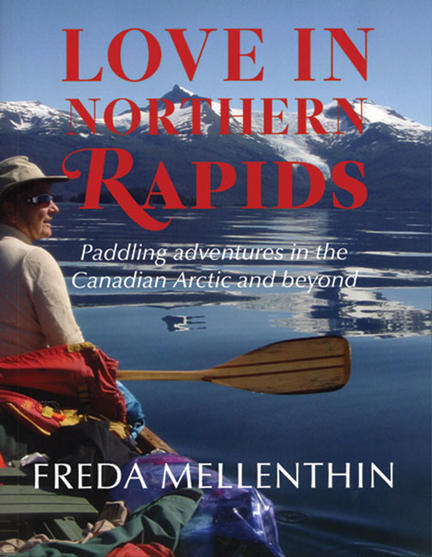 Love in Northern Rapids recounts canoe trips over more than a dozen years on many arctic rivers and on the Beaufort Sea, as well as the Inside Passages (in both B.C. and Alaska), the Sea of Cortez, and other waterways. Freda’s tales of wilderness exploration will entertain experienced recreationalists as well as armchair adventurers—for the places she describes are so remote that they are visited by very few. Woven into the stories are the couple’s ups and downs of their growing relationship.

At age sixty-two, seven years a widow, the author met Ted Mellenthin, an enthusiastic whitewater paddler of the same age who brought along a canoe on their very first date. The adventurous pair hit it off immediately, and Ted started to teach Freda the first basic paddling strokes.

In the summer of 1999, only months after that first blind date, Freda and Ted set out on their first canoe expedition— into the Canadian Arctic. They paddled 1200 kilometres in six weeks, from northeast of Yellowknife, in the Northwest Territories, to Baker Lake, in Nunavut. Despite run-ins with wildlife, dangerous whitewater, and punishing portages, they were soon planning their next adventure.

Author Freda Mellenthin, (formerly Freda Starck), was born into a traditional, German-Baltic family, who had been living for generations in the Hanseatic town of Riga on the Baltic Sea, the capital of Latvia. Due to the Second World War her family was displaced, spending the war years in Poland and fleeing under drastic conditions to Germany in 1945, where she went to school. In 1956 she graduated from a German secondary school and subsequently completed a two-year technical agricultural sciences program.

Freda was always an adventure-driven and sport-minded person, enjoying gymnastics, hiking, climbing, biking, skiing and swimming. In her teens she learned to love nature and wilderness camping while hiking through many European countries with members of a post-war youth organization.

In 1958 she immigrated to Canada and married a year later. At the age of forty-two, when her four children had become more independent, she started attending Simon Fraser University and received a bachelor of arts with a French major and then a professional teaching certificate. Subsequently she taught French Immersion in the public school system. In 1991, she was widowed after thirty-two years of marriage. Three years later, she volunteered for six months to teach languages in a secondary school in Russia.

In October 1998 Freda met Ted Mellenthin, a like-minded person, who introduced her to whitewater canoeing. He also enticed her to accompany him on canoeing expeditions into the Canadian Arctic. The pair married after their first canoe trip into the tundra in 1999 and since then have undertaken ten canoe trips north of the sixtieth parallel, among many other canoe and kayak trips. Ted and Freda live in the Mission area in British Columbia on rural property.