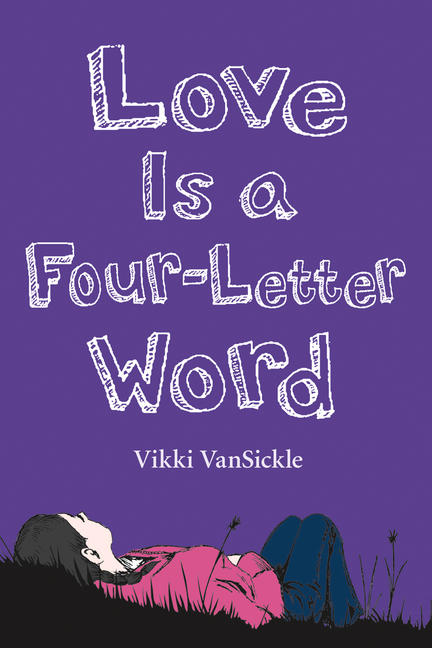 Where love and friendship are concerned, if you don't move forward, you'll get left behind.

Love: little word, big consequences. Clarissa has never given much thought to the word herself; she has other things to worry about. Her mother is still recovering from breast cancer, and until Clarissa hears that magical word "remission," she doesn't think she'll ever be able to relax.

As a distraction, she and best friend Benji try out for a community production of The Wizard of Oz. But sadly only he makes the cut, leaving her disappointed and best-friendless, and forced to spend her time with other people, like boy-crazy Mattie.

When Mattie becomes distracted by a new crush, and Clarissa's mother starts spending far too much time with her personal trainer, Clarissa wonders when she stopped being enough for all the people in her life. Enter Michael, who seems to be interested in more than just friendship. But is that what Clarissa wants?

VIKKI VANSICKLE is the author of Words That Start With B, Love Is a Four-Letter Word, Days That End in Y and Summer Days, Starry Nights, which was nominated for a Red Maple Award. She is an active member of the children's literature community, presenting at academic conferences, reviewing books, and managing her popular children's lit blog. Currently, she splits her time between writing and working in marketing and publicity. Vikki lives in Toronto, Ontario. Visit her online at www.vikkivansickle.wordpress.com.

Praise for Words That Start With B:

"A well-crafted and enjoyable first effors from a writer who is obviously tuned into the minds and emotions of young teens." -Quill & Quire

"This debut novel from bookseller-by-day Vikki Van Sickle is a fresh and honest look at a girl's school year in that wonderful, horrible, confusing time known as Grade Seven." -Canadian Booksellers Association

Love is a Four-Letter Word

Clarissa Louise Delaney is a girl with a lot going on. First, she auditions for the local production of The Wizard of Oz. Heartbroken when she doesn’t get a callback, she discovers that her best friend, Benji, did land a part. She has to put on a brave face and support him, but how can she when he starts spending all his time at rehearsals or with his new theatre friends?

Meanwhile, things are disconcerting on the home front as Clarissa’s mother starts dating her personal trainer. Since when does she need a boyfriend? Clarissa wonders. Why can’t it stay just the two of them? And then there is Michael. Does he really like her as more than a friend? Does she want him to? And what does that even mean? With Benji and her mother seemingly preoccupied, Clarissa isn’t sure who to talk to anymore. But, despite the changes in all of their lives, her own resourceful spirit remains undaunted, and she discovers that she is still surrounded by people who love her and can help her find her way.

This follow-up to Words That Start With B is perhaps even more delightful and charming than its predecessor. In Clarissa, VanSickle creates a plucky and believable character whose attempts to navigate the tumultuous depths of her emotions, while also trying to be what everyone else needs her to be, are touching and authentic. Dealing with what feels like the loss of her best friend and coming to terms with her mother’s new relationship, Clarissa takes tentative steps toward maturity. The various relationships are beautifully depicted, and this book expertly portrays the emotional frenzy of early adolescence. This is a sweet and sensitive story that is perfect for any middle school or junior high aged girl.

Love Is a Four-Letter Word

Clarissa feels alone: her mother has a new boyfriend, Benji is busy with a school play, and Mattie is boy crazy. But then she meets Michael, who wants to be more than just friends. Does she want more, too? Find out how Clarissa survives two make-overs, discovers a hidden talent for badminton, makes new friends and learns that love is a little word with big consequences. This is the sequel to Words That Start with B.

Other titles by Vikki VanSickle

Teddy Bear of the Year

Days That End in Y

Words That Start With B