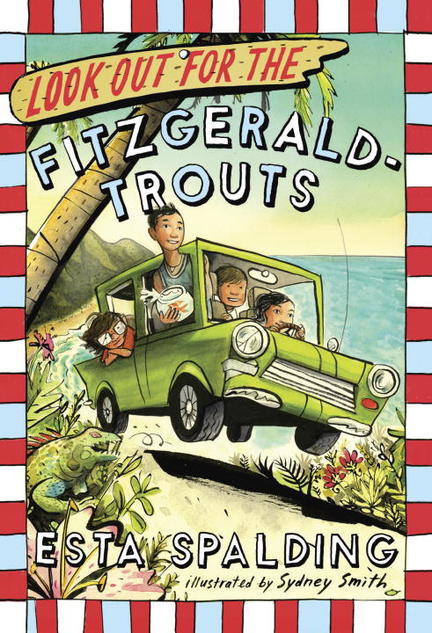 Kim Fitzgerald-Trout took to driving with ease--as most children would if their parents would ever let them try. She had to. After all, she and her siblings live in a car.

Meet the Fitzgerald-Trouts, a band of four loosely related children living together on a lush tropical island. They take care of themselves. They sleep in their car, bathe in the ocean, eat fish they catch and fruit they pick, and can drive anywhere they need to go--to the school, the laundromat, or the drive-in. If they put their minds to it, the Fitzgerald-Trouts can do anything. Even, they hope, find a real home.

Award-winning poet and screenwriter Esta Spalding's exciting middle grade debut establishes a marvelous place where children fend for themselves, and adults only seem to ruin everything. This extraordinary world is brought to vibrant life by Sydney Smith, the celebrated artist behind Sidewalk Flowers.

Esta Spalding's first book, Carrying Place, was nominated for the Gerald R. Lampert Award and her second, Anchoress, was a finalist for the Canadian Booksellers Association Libris Award for Best Specialty Book of the Year. Her third book, Lost August, won the Pat Lowther Memorial Award, and her fourth, The Wife's Account, was shortlisted for the Pat Lowther Memorial Award. Esta lives in Guelph, Ontario.

"The illustrations are awesome, and the stories almost write themselves with that brilliant plotline." --Huffington Post Canada

"Spalding, a poet and screenwriter making her children’s book debut, balances the direness of their situation with over-the-top characters and humor-driven narration. If the story’s magic lies in its Dahl-esque approach to topics like homelessness and parental neglect, its heart lies in the relationship between these four mutually devoted children." --Publishers Weekly

"If this sounds like the set up for a preposterous tale that incorporates a fantastical plot, quirky characters, and some child-friendly amorality, that’s because Look Out for the Fitzgerald-Trouts is exactly that and more . . . This is plain fun with an edge, after a Dahl-esque fashion." --Quill & Quire
"A touch of Everything on a Waffle weirdness; a touch of The Willoughbys sendup; and a warm, genial, wholly original voice.” --Horn Book Magazine
"This delightfully absurd story is sure to catch a young reader’s imagination .... The main characters are appealing, enterprising and capable . . . the plot intrigues, engaging us in the youngster’s problems and their adventures, [involving] many twists and surprises . . . Award-winning Sidney Smith’s whimsical illustrations capture the zany flavor of the story." --CM Magazine

Other titles by Esta Spalding

Shout Out for the Fitzgerald-Trouts

Books of the Year: For Young Readers