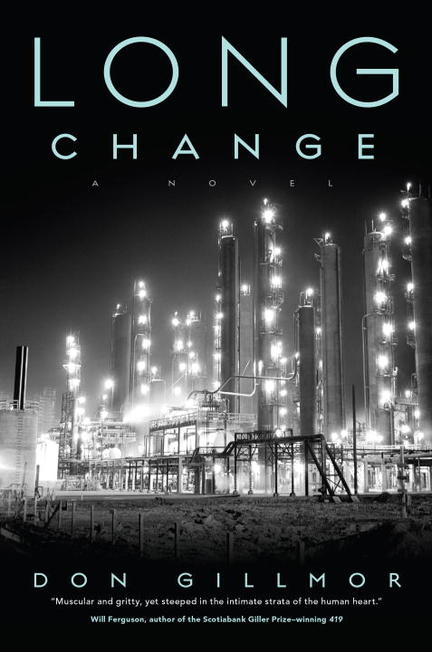 Don Gillmor's brilliant new novel, Long Change, examines the world of oil through the life and loves of one man; both stories are epic.
Fleeing his violent, Pentecostal father, as well as a crime he committed in the parking lot of the first bar he ever entered, Ritt Devlin leaves Texas at fifteen, crossing the border into Alberta. Big for his age, he soon finds work on an oil rig on the outskirts of Medicine Hat. But that's not the life he wants, and he saves up to study geology. By the time he's in his early twenties he's the head of his own oil company.
Spanning almost seventy years, and following the geology and politics of oil from Texas to the Canadian oil patch, to Nigeria, Equatorial Guinea, Azerbaijan, various political capitals, and the Arctic, Long Change is divided into three parts, each of them framed by one of Ritt's marriages. The first, to his great love, Oda, shows the beginnings of his company; that marriage is cut short when Oda dies of cancer while carrying their first child. His second wife is Deirdre, an elegant lawyer who helps Ritt expand Mackenzie Oil, but who needs more than business from her marriage. Then there is Alexa, a late middle age fling, a bad idea on both sides, in some ways as violent and delusional as the oil business.
The vision that drives Ritt throughout his life is to drill in pristine Arctic waters, and he pulls it off. But then comes the inevitable disaster. Ritt, now in his eighties, is not the man he was in any sense of the word. As he staggers away from the scene of the disaster, through the Arctic night, we know the dream of oil and of his own company is also burning in the night...

Don Gillmor is the author of the Libris Award-winning Canada: A People's History as well as six books for children. He was a contributing editor to Saturday Night magazine and has won many awards for journalism. He is currently senior editor of Walrus magazine.

“An epic tale of oil and its obsessions, stretching from the Arctic Circle to the humid swamps of the Niger Delta, from West Texas to the plains of Southern Alberta. Muscular and gritty, yet steeped in the intimate strata of the human heart.” —Will Ferguson, Scotiabank Giller Prize–winning author of 419

“A rig hand become petro-millionaire follows his oil hunger to the continental edges. Don Gillmor’s novel is fast-moving and smart, and his prose has a keen edge.” —Fred Stenson, author of Who by Fire

“Long Change is a jackpot of a novel: a century-spanning epic of glittering riches, dangerous gambles, and dark, combustible secrets that bubble just below the surface. Don Gillmor has long been one of the country’s best journalists; now he affirms his place as one of its best novelists.” —Adam Sternbergh, author of Shovel Ready and Near Enemy

“The interior life of an oil man—what a daring book. Ritt Devlin is a decent, stalwart, sympathetic public enemy with an intuitive understanding of the earth’s depths but legitimate questions about his own. A novel to take you places you fear to go.” —Padma Viswanathan, Scotiabank Giller Prize finalist for The Ever After of Ashwin Rao

“[A]n ambitious book. . . . It’s a testament to Gillmor’s writing that these stories . . . are as real and exciting in his novel as they would be if I were hearing them from a driller on a slow day. . . . The action in the novel is relentless . . . you can allow yourself to be pulled from page to page, confident that you won’t be kept waiting for a payoff.” —The Globe and Mail

“Long Change, the new novel from acclaimed Toronto writer Don Gillmor, starts with a bang. . . . [It] is an intimate epic, a tightly focused personal narrative set against one of the most powerful economic forces of the twentieth century. Like Gillmor’s last novel, Mount Pleasant, Long Change explores the intersection of money and life, the heady false promises of success and the bitter inevitability of failure. In the new novel, the canvas is broader, the stakes higher. . . . Long Change is a window into a world which few readers will have really considered, a deeply embedded critique not only of the oil industry—certainly a ripe subject for such examination—but of the North American myth of success, a warning of the shaky ground where money overshadows and subverts passion, the quicksand where dreams slowly suffocate, long before the bullets start to fly.” —Robert J Wiersema, National Post

Other titles by Don Gillmor

The Boy Who Ate the World

(and the girl who saved it)

Insight and On Site

The Architecture of Diamond and Schmitt

Sophie and the Sea Monster