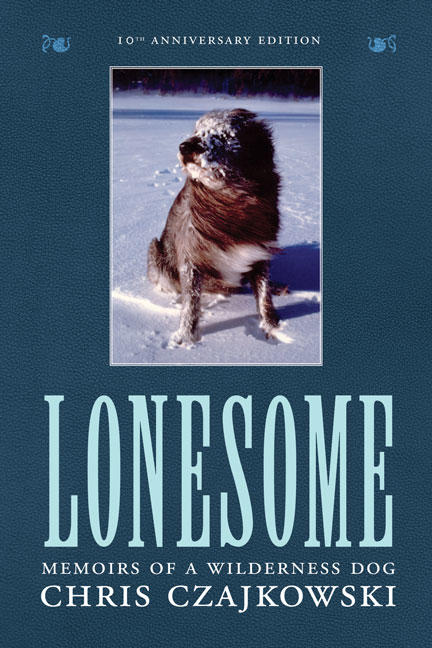 Canada’s most opinionated dog is reunited with her adoring readers in this handsome tenth-anniversary edition of TouchWood Editions’ bestselling title.

It was ten years ago that this charming book first stole the hearts of dog lovers everywhere. Written from the point of view of Lonesome, a lovable dog of great intellect and character, Lonesome regales the reader with tales and observations of life in the wild.

Named after the remote Lonesome Lake in British Columbia’s Tweedsmuir Park, Lonesome was a first-rate companion to her human—obedient, mannerly, and brave, yet occasionally cynical—although she did not share her human’s love of the wilderness and would have preferred life in the suburbs.

Following in the tradition of classics like Old Yeller and The Incredible Journey, Lonesome’s charming, humorous, and utterly engaging memoir embodies the undeniable love and inevitable differences between a special dog and her human companion.

With over 20,000 copies sold, TouchWood Editions is introducing this new anniversary edition so that Lonesome’s story can be enjoyed by a new generation of readers.

Chris Czajkowski was born and raised in the north of England. She lived and worked in Uganda, New Zealand, the South Pacific and South America before settling in the remote reaches of British Columbia's Coast Range mountains, 480 kilometres north of Vancouver, where she created the Nuk Tessli Alpine Experience, an ecotourism business catering to hikers and naturalists. She has written ten books about her nearly thirty years of wilderness living, including Snowshoes and Spotted Dick: Letters from a Wilderness Dweller, A Mountain Year: Nature Diary of a Wilderness Dweller, A Wilderness Dweller's Cookbook: The Best Bread in the World and Other Recipes and most recently, Ginty's Ghost: A Wilderness Dweller's Dream.

Other titles by Chris Czajkowski

And the River Still Sings

The Best Bread in the World and Other Recipes

Nature Diary of a Wilderness Dweller

One Woman's Story of Building a Home in the Wilderness

Wildfire in the Wilderness

Diary of a Wilderness Dweller

Letters from a Wilderness Dweller

For the Love of Dogs!