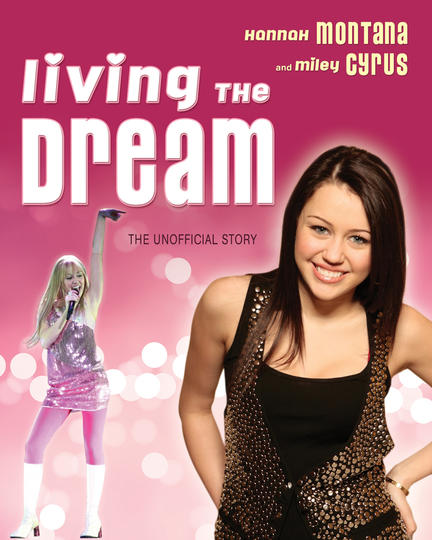 ?Miley Cyrus, the daughter of country singer Billy Ray Cyrus, persisted in auditioning for the Hannah Montana role, was consistently turned away but nonetheless kept picking herself up, dusting herself off and trying again. And that persistence paid off. Miley was cast as Hannah — the TV pop superstar who is trying to balance her celebrity with a normal life as Miley Stewart, thus living a secret identity along the lines of Clark Kent and Superman — and Hannah instantly connected with the television audience, which turned the character and Miley herself into a sensation. And since that debut, there have been CDs that have sold in the millions, fashion and book lines, best-selling DVDs, a concert tour that sold out literally within seconds of tickets going on sale (with one woman going so far as to spend $13,000 on a set of four tickets!), a 3-D concert movie, and a full-length feature film to come. Living the Dream tells the story of the auditions, the casting of Hannah Montana, and what was involved in creating the Stewart family. There are biographies of the principal cast members — Miley, Billy Ray, Emily Osment, Mitchel Musso, and more — and interviews with the creators of the show. There’s a look at the phenomena outside of the show: the CDs, the concert tours (including photos from fans), and the buzz on the upcoming movie. An episode guide reveals the story behind the scenes, as well as things to watch for in each episode to date, and a news diary tracks the rise of the Miley/Hannah phenomenon. Plus there’s more than a hundred full-colour photos. For the growing numbers of MIley Cyrus and Hannah Montana fans, this is a book that will make them appreciate the show and the stars even more.

Susan Janic is an entertainment journalist who has covered the television medium for a number of different magazines. She lives in New York City.

Other titles by Susan Janic