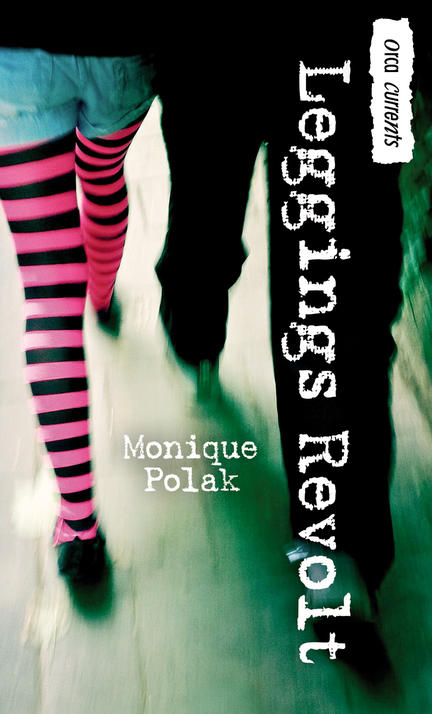 Eric and his buddies have left behind their all boys school to attend high school with girls. Eager to find his place in this exciting new world, Eric joins the student life committee, unaware that he is expected to enforce the school’s strict dress code. The dress code is particularly harsh on the girls he is keen to get to know. Eric finds this awkward, but it’s nothing compared to the position he finds himself in when the whole school revolts.

MONIQUE POLAK is the author of 26 novels for young readers, as well as two non-fiction titles and a board book. Her books Hate Mail, Room for One More, and the historical novel What World is Left, which was inspired by her mother’s experience during the Holocaust, were all winners of the Quebec Writers’ Federation Prize for Children’s and YA Literature.

Her books have also been nominated for the Geoffrey Bilson Award for Historical Fiction for Young People and the Arthur Ellis Award, and several have been selected as Best Books for Children and Teens by the Canadian Children’s Book Centre.

She is also a freelance journalist whose work has appeared in The Globe and Mail, Macleans, and Postmedia newspapers across the country, and is a columnist on ICI Radio-Canada’s Plus on est de fous, plus on lit! Monique lives in Montreal, Quebec, where she teaches English and Humanities at Marianopolis College.

"Will appeal to both male and female readers who are just beginning high school...The themes of community involvement and civic responsibility are important in this novel."

"By making a boy her main character but putting the book's focus on the injustice done to girls, Polak might well appeal across the gender line...The novel moves swiftly and may provoke some thought...intriguing."

"Students will enjoy this David-and-Goliath story...The hot-button topic of dress codes is a solid focus for this high/low offering."

"Through novels like this, where readers live in the skin of others affected by this issue, ideas niggle in and take root, perhaps inciting opportunity for discussion at younger ages."

"Monique Polak engages the reader instantly with the first sentences of her book...Leggings Revolt is about a young man who learns about himself while he defends what he believes in. Recommended."

Other titles by Monique Polak

What World is Left

How Jobs Shape Our Lives and Our World

Room for One More

The Taste of Rain

I Am a Feminist

Claiming the F-Word in Turbulent Times