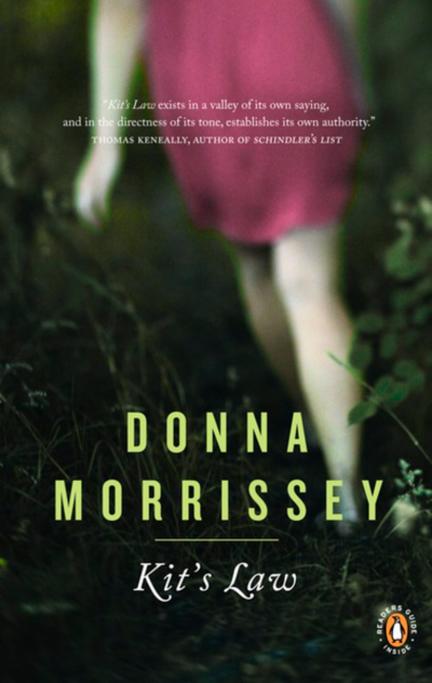 It is the Fifties in an isolated outport in Newfoundland. Nothing penetrates this antiquated existence, as television, telephones, cars, even roads, elude the villagers and the only visitors are fog-bound fishermen. Here, outside of Haire’s Hollow, lives 14-year old Kit Pitman with her mentally handicapped mother Josie — both women cared for and protected by the indomitable Lizzie, Kit’s grandmother. The three live a life of some hardship, but much love, punctuated by the change of seasons in the isolated gully where they live.

Then a tragic change in their circumstances brings back an old threat — that Josie be sent to an institution and Kit to an orphanage. Advancing this argument is the Reverend Ropson, who from the pulpit decries Josie as the “Gully Tramp.” Defending the women is Doc Hodgson, who brought Kit into the world and knows the secrets of her birth. An uneasy truce is forged, with the Reverend’s son Sid acting as spy and woodcutter, while village women supply food and gossip. Josie delights in Sid’s visits, and Kit grows to love him.

There is another menace in Haire’s Hollow — the notorious rapist and killer known as Shine. When Shine attacks Kit in a drunken rage, it sets off a chain of events that leads to further violence and a terrible revelation. Kit and Sid must decide which laws of God and man apply in their despairing world and how much misery they can bear.

Kit’s Law is a stunning debut written with the stark rawness of character and landscape of the Rock itself. It evokes the lyrical gifts of E. Annie Proulx, the emotional power of Wally Lamb, and the compelling storytelling of Ann-Marie MacDonald. At its centre is the innocence and determination of Kit herself, a young woman who experiences extremes of pain on the way to redemption. As she says: “It is better to sense nothing at all, to move through the world and glimpse it from a distance, then to split God’s gift in half and live in its underside, with no rays of light dispersing the darkness.”

Donna Morrissey was born in The Beaches, a small village on the northwest coast of Newfoundland that had neither roads nor electricity until the 1960s a place not unlike Haire’s Hollow, which she depicts in Kit’s Law. When she was sixteen, Morrissey left The Beaches and struck out across Canada, working odd jobs from bartending to cooking in oil rig camps to processing fish in fish plants. She went on to earn a degree in social work at Memorial University in St. Johns. It was not until she was in her late thirties that Morrissey began writing short stories, at the urging of a friend, a Jungian analyst, who insisted she was a writer. Eventually she adapted her first two stories into screenplays, which both went on to win the Atlantic Film Festival Award; one aired recently on CBC. Kit’s Law is Morrissey’s first novel, the winner of the Canadian Booksellers Association First-Time Author of the Year Award and shortlisted for many prizes, including the Atlantic Fiction Award and the Chapters/Books in Canada First Novel Award. Morrissey lives in Halifax, Nova Scotia.

The savage was Margaret Eveleigh the next day in school when she hurtled a folded piece of paper on top of my desk with “GULLY TRAMP’S GIRL—I’M GOING TO KILL YOU” scratched across it. Turning around in his seat, Willard Gale, second cousin to Rube Gale, with clusters of sores crowding his raw, reddened nostrils and his dirt-grimed hair smelling as rancid as stale fat, snatched the note out of my hands and stuffed it in his pocket.

“Willard!” snapped the teacher, Mr. Haynes. Grabbing the leather strap off the wall with large, chalky hands, he stomped down the aisle, his chunky legs hitting against the sides of everyone’s desks as he come. Willard cringed back in his seat, his chin bowed to his chest, and I quickly ducked my head into a book.

“What did you put in your pocket?” asked Mr. Haynes.

“Hold out your hand!”

Willard crouched deeper and . . . Crack! The leather belt smacked across the top of his desk.

“I said hold—out—your—hand!” Mr. Haynes ground out, and I knew without looking that his longish black hair had fallen over his forehead by now, and that the red bulb of his nose had changed into a livid purple.

Swish! The belt whistled through the air and thudded dully across padded flesh. Willard cried out, and he must’ve pulled his hand back because all I heard for the next savaged minute was the swishing of the belt smacking across the top of his desk, over and over and over, until Willard started bawling, more from the fright I allows, than of having the belt hit him. Then Mr. Haynes stomped back to the front of the room and, picking up a piece of chalk, scrawled across the board “I will not tell tales out of school” and ordered all of us to write the sentence one hundred times in our scribblers. Then, while we were writing as fast as our arms would let us, he marched up and down the aisle, ripping the pages out of our scribblers as we filled them up, and scrunching them into little balls, fired them into the coal bucket along the side of the stove at the back of the classroom.

The bell rung for recess, saving us from more writing, and flexing my fingers to get the cramp out of my hand, I ran out of the schoolhouse into the yard, savouring the fresh-smelling air. I had hardly filled my lungs when Margaret grabbed me by the collar and shoved me up against the picket fence.

“Your mother’s a tramp and your grandmother’s a loud-mouth pig and you tell her I don’t look like no tramp of hers—you hear me, Gully Tramp’s Girl?”

I stood still as anything as Mr. Haynes, his hair smoothed back over his forehead and his nose still flecked with purple, come up behind Margaret.

Margaret dropped her hands by her side and give Mr. Haynes a pouty look.

“Kit called me a tramp.”

I gaped at Margaret like a guppy fish and tried to keep my face straight as Mr. Haynes bent over, boring heavily squinted eyes into mine. I stiffened as he laid a heavy hand on my shoulder and gave me a little shake.

“Apologize to Margaret,” he said quietly.

“I’m sorry,” I half whispered.

“Say—I’m—sorry—Margaret!” he stated slowly, lips peeling back over gritted teeth.

He kept staring at me, his fingers digging into my shoulder, and my eyes wavered, not able to go far, as his face was a scant inch from mine, mostly to the bulb of his nose, and I saw that it wasn’t that his nose was purple, but that it looked purple from the dozens of tiny reddish veins meshing it.

“Is that all right, Margaret?” he asked, his eyes still searching out mine.

“Thank you, Mr. Haynes,” said Margaret, smiling sweetly. Then she ran off, leaving me struggling between the meshed, red veins and the boring, squinting eyes.

“Do you remember what I told you about reform school, girl?” he asked, his voice dropping lower, still.

“Irresistible… Masterful… The rich, rocky terrain of Newfoundland has borne a native storyteller with talent to burn in Donna Morrissey.” –Dublin Sunday Tribune

“Donna Morrissey is a wonderfully gifted writer. The setting of her books is Newfoundland, but their appeal is universal. She unashamedly cares for her characters and sees them as real people with real lives worth caring and reading about. To read one of her books is to wind up laughing or crying or somehow doing both at once.” –Wayne Johnston

“Everything is hyper-vivid in Morrissey’s world, not excluding emotions, dreams and unresolved conflicts… Morrissey reveals the beauty and the terror of two economic realities, worlds apart from us and from each other.” –Toronto Star

Other titles by Donna Morrissey

A memoir of a Newfoundland childhood and the raucous, terrible, amazing journey to becoming a novelist

The Deception of Livvy Higgs