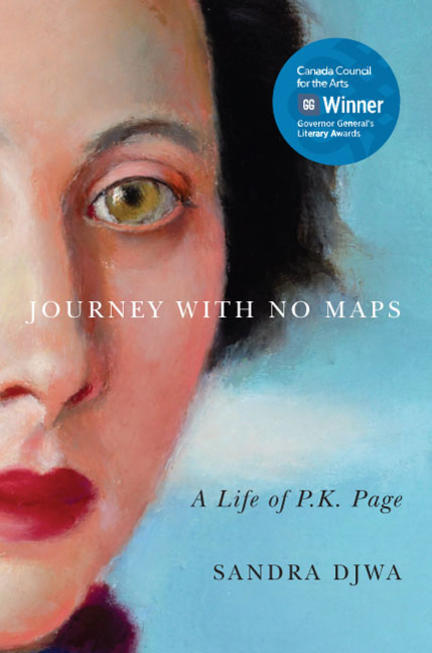 Journey with No Maps is the first biography of P.K. Page, a brilliant twentieth-century poet and a fine artist. The product of over a decade's research and writing, the book follows Page as she becomes one of Canada's best-loved and most influential writers. "A borderline being," as she called herself, she recognized the new choices offered to women by modern life but followed only those related to her quest for self-discovery. Tracing Page's life through two wars, world travels, the rise of modernist and Canadian cultures, and later Sufi study, biographer Sandra Djwa details the people and events that inspired her work. Page's independent spirit propelled her from Canada to England, from work as a radio actress to a scriptwriter for the National Film Board, from an affair with poet F.R. Scott to an enduring marriage with diplomat Arthur Irwin. Page wrote her story in poems, fiction, diaries, librettos, and her visual art.

Journey with No Maps reads like a novel, drawing on the poet's voice from interviews, diaries, letters, and writings as well as the voices of her contemporaries. With the vividness of a work of fiction and the thoroughness of scholarly dedication, Djwa illustrates the complexities of Page's private experience while also documenting her public emergence as an internationally known poet. It is both the captivating story of a remarkable woman and a major contribution to the study of Canada's literary and artistic history.

Professor Djwa is the author of E.J. Pratt: The Evolutionary Vision and a biography of F. R. Scott, The Politics of the Imagination (1987). She has edited Karl Klinck’s memoirs, Karl Klinck: Giving Canada a Literary History (1991). Her biography of Roy Daniells is forthcoming from the University of Toronto Press, and she is now beginning a biography of P.K. Page.

Other titles by Sandra Djwa

A Life of Roy Daniells

The Legacy of Roy Daniells and Garnett Sedgewick

F. R. Scott and His Works

including excerpts from Jephthah's Daughter and Jezebel: A Poem in Three Cantos