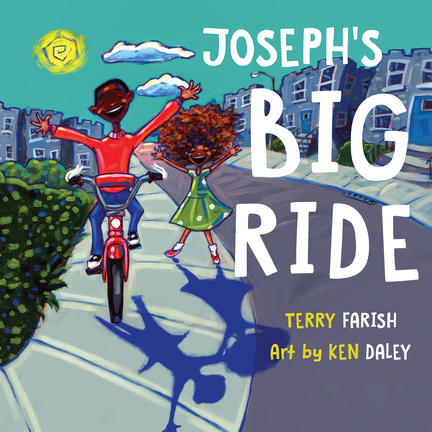 A refugee boy’s determination to ride a bicycle leads to an unexpected friendship.

Joseph wants only one thing: to ride a bike. In the refugee camp where he lives, Joseph helps one of the older boys fix his bike, but he’s too small to ride it.

Joseph and his mother travel to America, where everything is strange and new. One day, he spots a red bike that seems just right for him! It belongs to a girl with a whoosh of curly hair.

When Whoosh crashes her bike, Joseph offers to fix it. His big chance has finally come, except that Joseph doesn’t know how to ride! He crashes a few times, picks himself up, and tries again, until suddenly, with a shout of triumph, he’s riding the bike.

Inspired by the author’s interviews with refugee children from Sudan, this gentle story evokes the experience of a new immigrant. Vibrantly colorful paintings bring a warm and humorous portrait of friendship and diversity to life.

TERRY FARISH is an author of picture books and young adult novels, many influenced by her trip to Kakuma Refugee Camp in Kenya and work with the Red Cross in Vietnam. The Good Braider won the New Hampshire Literary Award and the Lupine Award. It was also an ALA Best Book for Young Adults and a School Library Journal Best Book. Joseph's Big Ride, illustrated by Ken Daley, received a Skipping Stones Honor, and The Cat Who Liked Potato Soup, illustrated by Barry Root, won a Bulletin for the Center of Children's Books Blue Ribbon. Terry lives in Kittery, Maine.

Ken Daley is an illustrator who draws inspiration for his work from his African Caribbean roots. He has illustrated Joseph’s Big Ride by Terry Farish, which received a Skipping Stones Honor Award for International Multicultural Books, and Auntie Luce’s Talking Paintings by Francie Latour, an Américas Award Honor Book and a Kirkus Best Picture Book about History and Tradition.He has exhibited his art in Canada, the United States and the Caribbean, and his work can be found in numerous private collections. Ken lives in Cambridge, Ontario.

Other titles by Terry Farish

A Feast for Joseph

Other titles by Ken Daley

A Jamaican Story of Food and Family

A Feast for Joseph