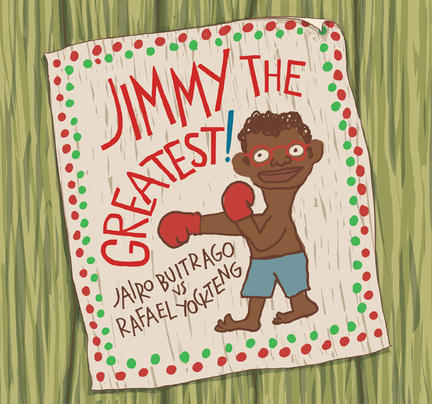 Jimmy lives in a small town by the sea where there is just one tiny gym. The owner of the gym suggests that Jimmy start training, and to inspire him, he gives Jimmy a box full of books, as well as newspaper clippings about Muhammad Ali - "The Greatest." Jimmy is swept with admiration for Ali. He begins to read and run and box like crazy, even though someone at the gym has taken his shoes. And as he does so, he makes a great discovery: you don't have to leave home to be "the greatest."

Unlike many stories about emigration, Jairo Buitrago's simple, profound text is about someone who decides to stay in his small remote town in Latin America. Combined with Rafael Yockteng's humorous illustrations, this book will be especially appealing to boys and boxing aficionados.

JAIRO BUITRAGO is a children's book author who has collaborated with Rafael Yockteng on several picture books, including Jimmy the Greatest! (six starred reviews), Two White Rabbits (three starred reviews), Walk with Me (three starred reviews, Kirkus Prize shortlist), Lion and Mouse (two starred reviews) and most recently, Cave Paintings. They won the "A la Orilla del Viento" contest for the Spanish edition of Walk with Me, which was also named to IBBY's Honor List. Their books have also appeared on "Los mejores libros del año" (Venezuela's Banco del Libro), Kirkus Best Books, the Horn Book Fanfare and in the White Ravens Catalogue. Jairo has also won the Hispanoamericano Castillo prize for children's literature and the Antonio García Cubas Award. He lives in Mexico City.

This is a genuine, bighearted picture of life in a Third World village that neither romanticizes poverty nor evokes pity—and it packs a powerful punch.

This gentle tale of self-fulfillment and acceptance will be a winning addition to collections.

A splendid example of the power of showing rather than telling.

"Jimmy the Greatest! is a compelling story containing many layers of significance and understated wisdom."

Eye-opening inspiration in this unassuming import from Colombia

In a world where so many must leave their homes to find work, it's inspiring to see Jimmy able to do a truly great thing, right where he wants to.

Other titles by Jairo Buitrago

On the Other Side of the Garden

Other titles by Rafael Yockteng

On the Other Side of the Garden