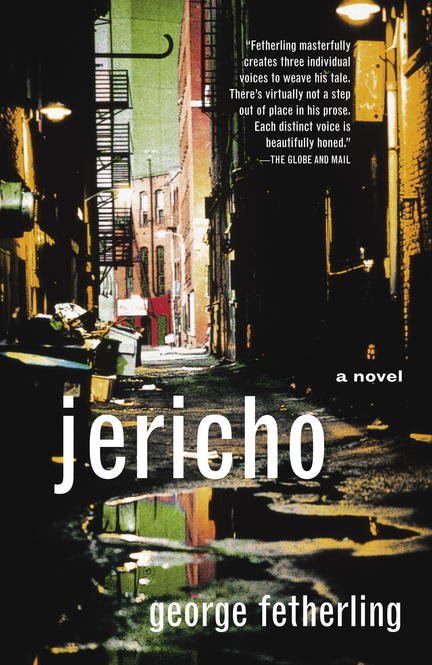 Vividly conjured out of the hustle and crime of Canada’s poorest neighbourhood, this poetic and picaresque novel stakes a new claim on the fictional territory of Don DeLillo and Chuck Palahniuk.

Bishop isn’t a man most women would find attractive: a middle-aged marijuana dealer who owes his ponytail to hair transplants, and his twisted knowledge of books to the reading he’s done in rehab. But for one brief moment he catches the eye of Beth, an innocent from rural Alberta — who, at that same instant, excites the self-destructive lust of Theresa, a social worker and therapist wannabe. These strange comings-together in Vancouver’s Downtown Eastside propel the three characters on a wild race through British Columbia’s mountainous interior, headed toward Bishop’s self-invented city on a hill. It turns out they are also on a journey through concepts of family, urban dislocation, gender identity and the disconnections of language itself.

• Now that the whole story is over, the question everybody keeps asking me is the same one I’m still asking myself: How did I get involved with a man like that? Or didn’t I have more sense in the first place than to run away with someone I didn’t know? I can’t explain, I can only tell you what happened, the same way I told the police and the lawyers. That’s the easy part.

I didn’t really like him that much, not at first and not afterwards, but only for a while in-between. Now that I’ve had time to think about it, I guess I could make a pretty long list of things about him that would turn anybody off. For instance, he didn’t have very good skin. As someone who was a trained esthetician in those days, I always wanted to help him with this, but I couldn’t quite figure out how to do it without hurting his feelings — back when I didn’t understand this wasn’t the kind of thing he would have cared about one way or the other. Now I know exactly what he would have said: “Ha!” Which would have hurt my feelings. Another thing: his bottom front teeth were stained like those of an elderly Chinese-Canadian man who’d been drinking too much tea his whole life. And most of the time he didn’t make very good eye contact when he spoke to you. In my new career I know how important good eye contact is in dealing with the public. Not that he was a member of the public, of course. He was private. Being with him in those good weeks was like having my own private wild man. He smelled wild. His scent always made me think of a wolf’s den. I don’t mean that I really know what a wolf’s den smells like, but I could guess. When he did decide to make eye contact, though, it was spectacular. His eyes were the same colour as green grapes.

I’d sure never met anyone like him. There may be some others around, but I never met them in Alberta. He’s not the sort of person anyone would meet in Alberta. He was from back east somewhere. He used to talk about it sometimes, and I thought he was making it up or at least letting his own talk run away with him; other times I wasn’t so sure. I’d never thought much about the East. If you blindfold me and spin me around like a bottle, I’ll always wind up facing west. Of course, there are degrees of west, and I suppose there are degrees of east too. He was from someplace that must be pretty old — beaten down and worn down — though my instinct tells me it’s a place that’s not completely explored, maybe a place there aren’t even up-to-date maps of, I don’t know. I was so naive back then, I didn’t even know how naive I was. Bishop was a lot of things, but you couldn’t call him naive exactly.

If when I tell you this story I seem a little distracted, it’s only because I’m thinking of my mother. She’s practically the only one who never asked me why I acted so crazy and got into trouble and embarrassed everybody. But there’s another question, just as big, that hangs over us when we’re in the same room together now. It’s: How could I have made the same kind of mistake she made? I’m pretty much sure that’s why she doesn’t ask me the Question. Mother and I used to think we had the best mother–daughter communication it was possible to have. Now we’re not so sure. Or maybe it’s only that our best communication doesn’t find its way down from our brains to our mouths.

• The wolves have issues with the moon. Sometimes when I’m down really deep I think I hear em. I know I do in my head at least. You don’t need to be able to touch something or even see it before it’s real; a thing can be real in your brain. This usually happens when I’m all stretched out and everything’s ready to go but the mind won’t leave the body in the death-rehearsal that’s supposed to happen every night: it’s like a fire drill only it’s a death drill. Who else except me could wander off in the head when it’s so damn noisy? Then during the day, when I’m so tired I feel like I’ve got a layer of crinkled cellophane behind my eyeballs, I’ll all of a sudden think that I hear the wolves again, only way far off and weak this time. Or maybe they’re just secretive, speaking to each other in wolf whispers, barely working their mouths and with their ears straight up so’s to eavesdrop on us. But I figure out it’s only the heating system or a generator clicking in maybe, something deep inside the walls, and I come to my senses. I say to myself: Honestly, what’s somebody like you know about wolves?

• The first time I ever laid eyes on Bishop he was making trouble outside the Art Gallery on Robson Street. What he was doing was tormenting a mime artist. This strikes me as funny now, because Bishop was a man of words, big spring downpours of talk, sometimes beautiful and sometimes, well, disturbing. The street performer, who I now know was about half Bishop’s age, was doing the standard old-fashioned things that mimes do: man walking against a stiff wind, man in a foot race up steep stairs, man discovering that he’s trapped inside an invisible glass cube. (Why aren’t there more women mimes?) Bishop had obviously picked him out as somebody he could make life miserable for. He was parroting his movements, sometimes running a bit ahead of the poor guy just to confuse him, then putting his own face right up against the mime’s; their noses almost touched. I couldn’t tell from where I was sitting, at my jewellery stand, but looking back now I think Bishop was probably giving him the death’s-eye stare to scare him off. The mime was trying to keep as still as one of those Buckingham Palace guards in the tall fur hats, but Bishop got to him. The guy actually seemed close to sobbing as he picked up his jacket and his collection basket and hurried off to some other good tourist corner. Bishop was triumphant. As the fellow went away, Bishop screamed after him, “First we kill all the mimes! Shakespeare!” That was the first time I ever heard that little snorty laugh of his: “Ha!” People passing by stared at him.

"Jericho is a funny quirky and acutely observed road trip along the rough edge of our culture. It’s a novel that retells some of the myths — urban and otherwise — that define us."
—Nancy Richler

"There is something brave about careening towards the darkness, whether it’s done via sexuality, outlaw behaviour or writing, and Fetherling’s ability to dispense with his critical mindset in favour of an exploratory one will be surprising to anyone who has perceived him as primarily a brainy person, abstracted on high. Jericho is risky and alive, and memorable in the long run for its presentation of a remarkable archetype."
—Alan Twigg, B.C BookWorld
"Voice is Fetherling’s great achievement here: the book is divided into sections narrated by each of the three, and the passages are so distinctive, so sure…"
—The Georgia Straight
"His genius is that he manages to give them each such unique language and thought processes that you can pick up the book, flip it open to a given page and instantly know who is in control of the story at that point….It’s worth reading and rereading."
—Edmonton Journal
"All three principal characters are interesting and complex. Bishop, in particular, is a unique and memorable creation: a combination of low-life drug dealer, prankster storyteller and visionary prophet of the wilderness."
—The Vancouver Sun
"Fetherling is a master of the perceptive comment and the dry remark, combining the keen observation of a social historian with a poet’s precision and joy in the play of words."
—Telegraph-Journal (New Brunswick)

"Jericho may be Canada’s first truly 21st-century novel, in terms of the perspective it provides on where we’ve come from and the directions we seem to be headed in….As a work of urban fiction — a slim category in Canadian writing — it stands among the very best."
—Telegraph-Journal (New Brunswick)

"There’s virtually not a step out of place in his prose. Each distinct voice is beautifully honed, and so completely self-absorbed that the other characters become mere shadows that move behind the screen of narration."
—Michel Basiliéres, The Globe and Mail
“At times funny...and at others puzzling, Jericho is driven by prose that bumps and bounces along as the characters search for Bishop’s mythical Jericho.
—The Sun Times (Owen Sound, ON)
Praise for George Fetherling’s fiction:
“Brilliant and eccentric.”
—Cary Fagan, Quill & Quire

“The File on Arthur Moss is a cunning, Kafkaesque fantasy of the soul of Canada under attack by American infodrones. By turns thoughtful, engagé and paranoiac (and paranoids have their uses!), it is a mysterious parable of seduction.”
—Douglas Glover, author of Elle

Other titles by George Fetherling

One Russia, Two Chinas / Running Away to Sea / Indochina Now and Then

The Carpenter from Montreal

Carpenter from Montreal, The

Indochina Now and Then

The Silence on the Shore

Running Away to Sea

Round the World on a Tramp Freighter