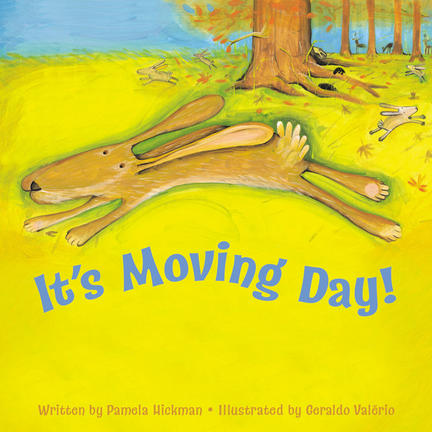 Tucked away beneath a big tree on the edge of a field lies a home --- a small burrow --- for many. In every season, a different creature makes its home here and then moves on, making room for the next occupant.

After a long winter's sleep, the woodchuck relocates to another burrow, but its former home is not left vacant for long. A cottontail rabbit raises her family there. After the kits have all hopped away, a salamander takes refuge in the same safe place.

Through this engaging and informative introduction to woodland animals in their habitats, young readers will delight in learning about natural science as it is integrated into an inviting picture book.

PAMELA HICKMAN is the author of over forty non-fiction books for children, including winners of the Green Prize for Sustainable Literature, the Best Book Award from the Society of School Librarians International and the Canadian Authors Association Lilla Sterling Memorial Award. She co-authored the first book in this series, Righting Canada's Wrongs: Japanese Canadian Internment in the Second World War. She lives in Canning, Nova Scotia.

A lively introduction to woodland animals ...

... an appealing and educational introduction ... [the] content is rich and abounding in natural drama ... acrylic illustrations ... are vibrant and filled with energy.

Valerio's acrylic illustrations jump off the page ... He uses naturalistic swathes of color to portray the seasons and the animals, excellently conveying birth, renewal and the passage of time --- indeed, the vivid and kinetic paintings are the real standout.

... The illustrations are distinctive and engaging ... a calming book to read to a young child who is nervous about moving ...

What do you suppose can be found lurking in a woodlot burrow? It’s Moving Day explores the ebb and flow of a subterranean den and the variety of woodland animals who seek its shelter over the changing seasons.

The initial resident is a hibernating woodchuck who eventually decides to leave the safety of the burrow in order to locate a summer home. These premises, however, are not left vacant for long. A cottontail rabbit moves in and makes it the perfect place in which to raise her kits. After their departure, in crawls a yellowspotted salamander who finds it just the right abode for passing the winter. Subsequent tenants run the course of raccoons, milk snakes, chipmunks and skunks. Many seasons pass, and the story reaches full circle with the residency of a second woodchuck, perhaps a descendant of the original occupant.

Pamela Hickman has written an appealing and educational introduction to woodland animals. Her words may be few but their content is rich and abounding in gentle, natural drama. Young readers will become acquainted with the behaviour and life cycles of the inhabitants of this dwelling. Further information is added in a brief but helpful biography about each creature. Geraldo Valerio’s acrylic illustrations of the woodland scenes are vibrant and filled with energy. There is an element of amusement as each page harbours a clue as to whom the burrow’s next resident might be. As one peruses these illustrations, one senses the ongoing juxtaposition of innocence and survival.

This charming publication will surely pique the interest of budding young naturalists. It’s Moving Day proves that, as often in the world of real estate — above or below ground, location is everything

Through this engaging and informative introduction to woodland animals, youngsters encounter eight residents of a single burrow through the changing seasons. Vibrant and cheerful acrylic artwork accompanies the story. Facts on behaviour and life cycles of featured animals are included.

Other titles by Pamela Hickman

Tree Is a Home, A

Nature All Around: Birds

Nature All Around: Plants

Nature All Around: Bugs

Nature All Around: Trees

Other titles by Geraldo Valério

My Book of Butterflies