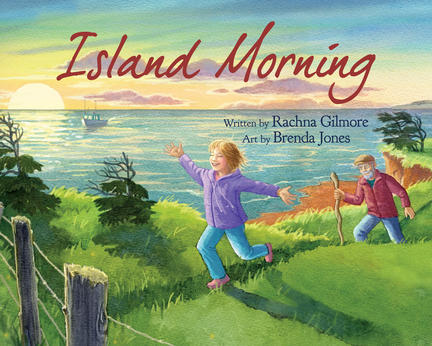 Island Morning is a gentle story of a girl and her grandfather’s early morning walk through the fields of Prince Edward Island. On their journey, they see gentle pastures, farm animals, scenic vistas and a glorious sunrise. But this walk is about more than just viewing the beautiful scenery. It is also about the special time between grandfather and granddaughter and how they see the world through each other’s eyes.

Rachna Gilmore is the critically acclaimed Governor General's Award winning author of numerous books with multiple honours and awards. Her publications include picture books, early readers, middle grade and young adult novels, as well as adult fiction. Her books are sold internationally with translations in French, Danish, German, Korean, Dutch, Spanish, Urdu, Bengali, Chinese as well as several other languages.
Rachna's fantasy novel, The Sower of Tales, won the National Chapter IODE Violet Downey Book Award, and was nominated for the Red Maple Award and the Manitoba Young Readers' Choice Award. Her YA novel, A Group of One, (published by Henry Holt, and now available in paperback in Canada, published by Fitzhenry & Whiteside) received a Jane Addams Children's Book Award Honor citation and was included in the New York Public Library's Best Books for the Teen Age list.
A student of life, Rachna loves to explore the ideas that spark and seize her imagination, as well as to play with words. She calls the process of creating books plarking - work, she says, is too tedious and grinding a word to describe the delight of the creative process, and play doesn't quite convey the real time and effort that goes into completing a book, whereas plarking covers it all, especially as it also reflects the joy and song of larking about.
Born in India, Rachna has lived in London, England, Prince Edward Island, and now lives in Ottawa. A skilled and experienced presenter, Rachna loves to share her enthusiasm for reading and writing; she has given readings and workshops in schools, libraries and conferences across the country as well as internationally.
Website: www.rachnagilmore.ca.

Brenda Jones is a native of Prince Edward Island and spent the last twelve years roaming the woods and fields gathering and studying the herbs around the Maritimes in order to understand the properties of these amazing plants and to help her with her own health issues. With her background as an artist and illustrator, she began painting each herb in meticulous detail to help in identification, and soon had her own herb garden in her backyard and a cupboard full of tinctures and teas.

Other titles by Rachna Gilmore

The Sower of Tales

Other titles by Brenda Jones

And the Christmas Dinner Rescue

Sid the Kid and the Dryer

A Story About Sidney Crosby

Lobster in My Pocket

A Foal, Five Kittens and Confederation

I is for Island

Best of Buddy The Bluenose Reindeer