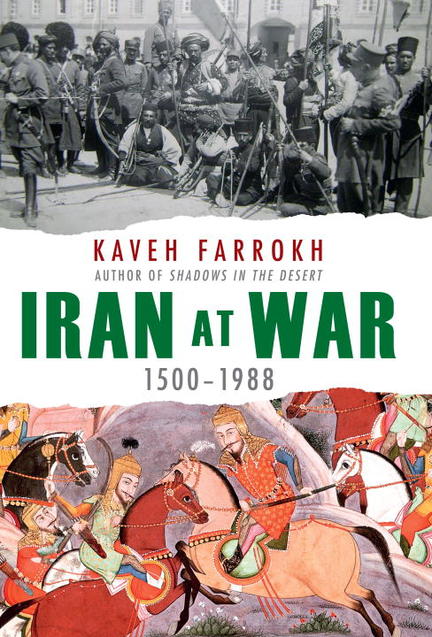 Following his award-winning book, Shadows in the Desert, which explored the military history of ancient Persia, in Iran at War Kaveh Farrokh turns his attention to modern Iran's wartime history. Beginning with the Safavid dynasty of the 16th and 17th centuries, he traces Iran's political and military progress to its dramatic turning point in 1979. In doing so, Farrokh demonstrates how Iran's current bellicosity on the world stage was shaped by centuries of military defeat and humiliating foreign influences from the likes of Russia and Great Britain.

Including illustrations and photographs, this book provides an unparalleled investigation into the bloody history of modern Iran.

Dr. Kaveh Farrokh was born in Athens, Greece, in 1962 and emigrated to Canada in 1983. Kaveh has collected data and primary sources on Sassanian cavalry for 18 years resulting in travels to locations such as Naghshe-Rustam (Iran). He has given lectures and seminars in the University of British Columbia and the Knowledge Network Television Program of British Columbia and has written articles for various journals. Kaveh obtained his PhD in 2001 from the University of British Columbia where he specialized in the acquisition of Persian languages. He is currently a learning and career specialist in Langara College in Vancouver, British Columbia. He acted as a historical advisor on the film Cyrus the Great, and has appeared on the History Channel documentary as an expert on the Persian Empire.

“Farrokh has analyzed the religious and non-religious wars and has demonstrated how Iran has been attacked by its neighbors from all sides (east, west and south) over several periods…Farrokh's analyses of the Islamic revolution and the Iran-Iraq war provides us information that has hitherto remained unmentioned…” —Museum and Center of Manuscripts, Iran

“Kaveh Farrokh is an expert on Persian languages and Iranian history whose new book, Iran at War: 1500-1988, provides a full examination of modern Iranian military history… His previous title Shadows in the Desert: Ancient Persia at War (Osprey, 2007) was named 'Best History Book' by the World Academy of Arts Literature and Media in 2008. Dr. Patrick Hunt at Stanford University, said this about it, '… a book for all who have ever been curious about the other view on Persia, not from theWestern standpoint rooted in Greece, but from the traditions of the Persians themselves… Meticulously researched and documented…'” —The Wall Street Journal

“Farrokh's incredibly detailed description of the Iran-Iraq war rivals any accounts of modern-day warfare history that this reviewer has lay witness to... The book is a must for the progression of modern day and historical Iranian scholasticism. At 480 pages, absorbing the book over time is best -- a book that's content contains such detail demands and deserves it.” —Robert Terpstra, The Business Daily Egypt (September 12, 2011)

“Dr. Kaveh Farrokh … has published a timely volume immersing readers in five centuries of how Persians have waged and conducted war. The book delves deeply into the history and psychology of warfare and provides a grounding of how Iranians see threats and challenges today.” —Youssef Aboul-Enein, Small Wars Journal (July 12, 2012)

Other titles by Kaveh Farrokh

Shadows in the Desert