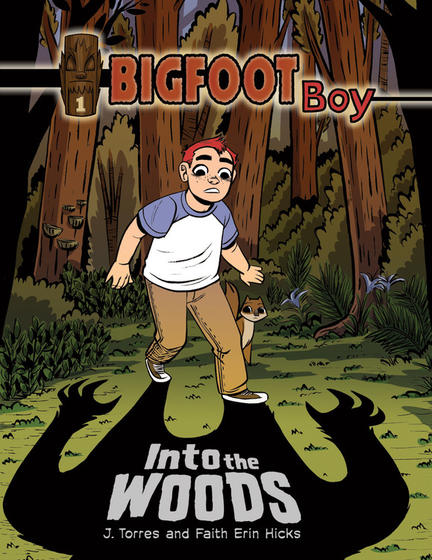 Bored while visiting his grandmother for the weekend, Rufus, an ordinary ten-year-old boy, ventures into the nearby woods after he spies his young neighbor Penny heading there. A city kid, Rufus quickly loses sight of Penny, but while making his way back to Grammy's, he's drawn to an unusual object he sees hidden inside a tree: it's a totem, carved out of wood and hung on a cord. Rufus places the odd-looking thing around his neck and reads out loud the word inscribed on it: “Sasquatch.” Suddenly, strange things begin happening all around him --- and to him. Rufus doesn't know what's going on, but he's sure of one thing. He'll never be ordinary again!

This is the first title in the unique Bigfoot Boy graphic novel series by award-winning author J. Torres. This intriguing story about an everyday kid who unexpectedly finds himself with a special power will have young readers hooked from the start. The artwork by Eisner Award-winning cartoonist Faith Erin Hicks keeps the action moving at a fast pace. With talking animals, likable characters and a plot steeped in magic and mystery, this compelling tale told in pictures and snappy dialogue will be a popular choice for newly independent readers, with particular appeal to reluctant readers. Inspired by the mythologies of the Pacific Northwest, it could also work in the classroom as an introduction to folklore and mythology.

J. TORRES is a Canadian comic book writer. He is perhaps best known for his run on DC Comics' Teen Titans Go, the Eisner-nominated Alison Dare, and the Junior Library Guild/TD Summer Reading Club title Bigfoot Boy. Winner of the Shuster Award for "Outstanding Writer," Torres has worked with characters from A (Archies) to Z (The Mighty Zodiac) and many more in between (Avatar, Batman, Ninja Scroll, Simpsons, WALL-E, Wonder Woman, Yo Gabba Gabba, and X-Men, to name a few).

Faith Erin Hicks draws and writes comics in Halifax, Nova Scotia. Her works include The War at Ellesmere, Brain Camp and Friends with Boys.

Other titles by J. Torres

Chirp: Knights of the Awesome Castle

Chirp: To the Peak

Other titles by Faith Erin Hicks

Comics Will Break Your Heart

The Nameless City: The Divided Earth

The Nameless City: The Stone Heart

Sound of Thunder, The

Notes from a Children's Librarian: Adventure and the Reluctant Reader

What better way to draw kids in to literature than through exciting plot-driven graphic novels?