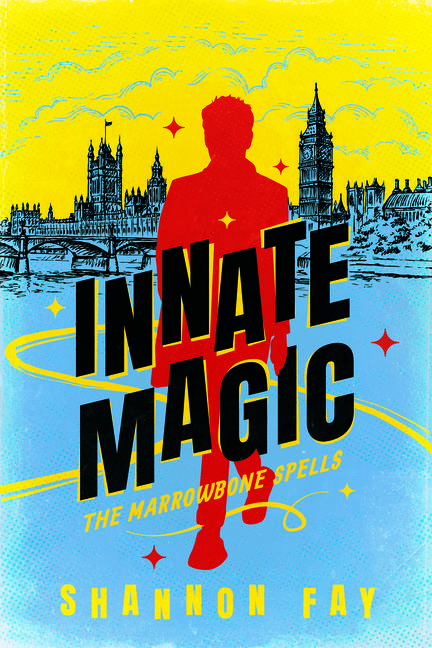 Delightfully cheeky, unquestionably charming, and sometimes maddeningly naive, cloth mage Paul Gallagher is desperately trying to make a name for himself in a reimagined postwar London. But in a world where magic is commonplace, sewing enchanted clothes is seen as little more than a frivolous distraction. Paul is hiding a secret, however: he possesses a powerful—and illegal—innate magic that could help him achieve his wildest dreams.

Unfortunately, Paul confides in the wrong person—his latest crush, Captain Hector Hollister—and is drawn into a sinister plot that risks reigniting the machinery of war. To make matters worse, the pretty American gossip reporter Paul just met reveals her personal quest to expose a government cover-up may be related to Hollister’s magical goals. When Hollister threatens the life of Paul’s dearest friend, he realizes that his poor judgement has put not only his family and friends in danger, but also the whole world.

The only way to set things right may be for Paul to undergo the dangerous ritual to become Court Magician—the most powerful magician in the country. But is becoming part of the institution the best way to enact change in a terribly unjust society?

Shannon Fay is the author of Innate Magic in the Marrowbone Spells series. A writer living in K’jipuktuk/Halifax, Canada, she attended the Clarion West Writers Workshop in 2014 and has a day job editing manga. She lives with her biggest critic (a very vocal, very fluffy white cat) and her biggest supporter (a very kind human). When not writing novels and short stories, she likes to go ice-skating (in the winter) and play board games (year-round). For more information visit www.ayearonsaturn.com.

An Amazon Best Book of the Month: Science Fiction & Fantasy

“Great fun on its own and a series to watch for.” —Kirkus Reviews

“An absorbing debut fantasy novel…This great first fantasy outing from Fay will be well received by adults and young adults who like V. E. Schwab and Leigh Bardugo.” —Library Journal

“An enchanting tale…This first book in the Marrowbone Spells series leaves the ending open for what’s sure to be an adventurous series; Fay is an author to watch.” —Booklist

“Innate Magic romps about a magic-infused mid-twentieth century London with a plot packed with both charm and grit. What a fun kickoff to a new series!” —Beth Cato, author of Breath of Earth

“Shannon Fay’s debut is a delight…just like its quick-witted cast of characters, underneath all the glamour Innate Magic has a big beating heart and serious guts.” —Rich Larson, author of Annex and Tomorrow Factory

“A fog-drenched fashion thriller full of romance, mystery, legacy, and panache. Innate Magic is a cracking romp through the post-war British class system with more twists and turns than the River Thames.” —Jennifer Giesbrecht, author of The Monster of Elendhaven

Other titles by Shannon Fay