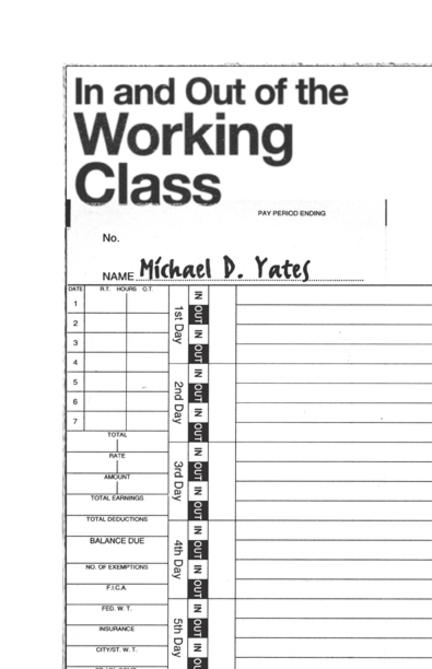 In a series of autobiographical essays written on the border between fiction and non-fiction, a radical economist considers what it means to live in and through the theories about class that have informed his work and teaching. Yates seeks to bring the complexity and ambiguity of class, racial, and gender identity into focus through his own life. Yates writes of the erosion of self-confidence and the anxiety caused by the everyday fears of working-class families. He speaks honestly of the ambivalence and heartbreak caused by upward economic mobility, while relating in a deeply personal way to the structures of class inequality in American life.

Michael D. Yates is an Associate Editor of Monthly Review and a labour educator. For many years he taught Economics at the University of Pittsburgh at Johnstown. He is the author of six previous books, including the recent Cheap Motels and a Hotplate: An Economist’s Travelogue.

It should be said … that Michael Yates’s collection is graced by some of the finest writing that you are likely to encounter from someone whose background is primarily in political and economic analysis. It is distinguished by his unique, plain-spoken voice shaped by growing up in a working class milieu, where pretensions of one sort or another were likely to earn you a bloody nose, as well as an obvious understanding of how to sustain the reader’s attention. — Louis Proyect, Swans

[Yates] moves up and out, but not away, from the consciousness of people who labor for a living. Crucially, In and Out of the Working Class never sugarcoats the working class, even as Yates highlights a social and economic system that spawns their alienation and exploitation. This is a major theme of his book, a recurrent problem that Yates deals with by supporting and forming bonds of solidarity with labor unions. — Seth Sandronsky, In These Times

Yates’ insightful new collection of autobiographical essays and short fiction, In and Out of the Working Class, describes how he made his own way back to the labor movement. That journey toward home began after he achieved, with some ambivalence, advanced degrees and upward mobility that many others have used to leave the world of blue-collar work far behind them. — Steve Early, State of Nature

The beauty is that Yates’ historical writing about his own life covers events that he was part of, written so that as a reader, I felt I was there. The fictional accounts that he includes throughout the book are so believable that I had to go back through later to remind myself which parts he lived and which ones he created. The fiction is not created out of whole cloth but is permeated with characters and events present in his life. — Joshua DeVries, Labor Notes

The collection lays bare all the obvious—and not so obvious—ways our system works to undermine the working class, collectively and individually. Yates explores the interlocking blocks of capitalist rule: racism, patriarchy, anti-communism, ingrained worthlessness. Sometimes they present themselves boldly but, for the most part, they emerge in real life more subtly, and rife with contradictions. — Elly Leary, Monthly Review

In and Out of the Working Class joins a growing field of what might be dubbed ‘working class studies,’ an academic subgenre that explicitly privileges studying class as an experience rather than a position in a class structure or set of class relations. But it doesn’t quite fit in because Yates refuses to accept such a dichotomy. Any number of contributions from this book would make a great addition to a class reading list, or just good reading for the general public or activist interested in the working class. — Dennis Pilon, Socialist Studies: the Journal of the Society for Socialist Studies