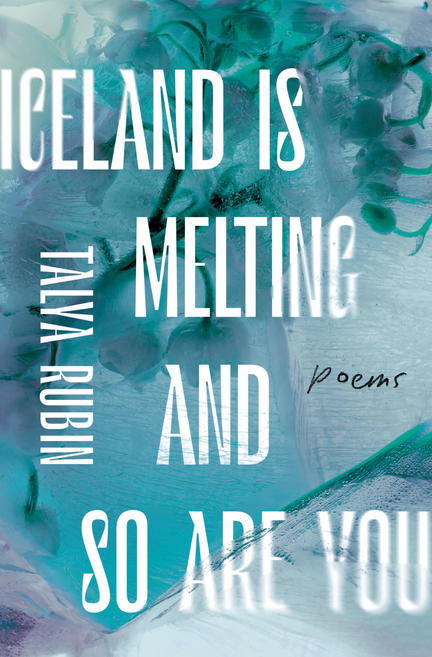 The urgency of the climate emergency is explored in this latest collection by award-winning poet Talya Rubin. It offers recognition of, and salve for, the vast mysteries of the natural world, our human interior, and the relationship between the two.

In these poems, human and wild meet in everyday encounters: the melting of ice sheets and fathoming ecological disaster while listening to news reports on the radio; moments of childhood ice skating and unrequited love alongside geological formations and weather patterns. Underlying the collection is a mild sense of absurdity, one that mirrors our existential plight of continuing on in the face of what feels like impossibility.

Iceland Is Melting and So Are You asks us to consider what we have kept frozen and unexamined within us and—in doing so—recognize the complex grief and wonder we face in considering the end of the human epoch.

Talya Rubin is a Canadian poet originally from Montreal. She was awarded the RBC Bronwen Wallace Award for Emerging Writers from the Writers' Trust of Canada in 1998. Her poetry has been longlisted for the CBC Poetry Prize and the Montreal International Poetry Prize. In 2015, whe won the Battle of the Bards and was invited to read at the Toronto International Festival of Authors. Her first collection, Leaving the Island, was published in 2015. Talya holds an MFA in Creative Writing from the University of British Columbia. She also runs a theatre company called Too Close to the Sun, and currently lives in Perth, Australia with her husband and son.

"Iceland Is Melting and So Are You is a fierce and melancholy collection of poems that both directly and indirectly addresses the central concern of the twenty-first century: global warming. Talya Rubin's carefully constructed poems are lyrical, compelling, and filled with the kind of passion that makes things happen. They're centred around both the places in danger and the people who live in those places as they tell the stories we need to hear in this alarming time, 'each year a story/of what we did/or did not/do.'" —Wyn Cooper, author of The Way Back

“In Talya Rubin’s Iceland Is Melting and So Are You, the poet is an expression and embodiment of the natural world in the throes of climate change. In this book, one will encounter ‘the tumble of glaciers and ice floes’ and remark how although, the ruckus goes ‘unnoticed,’ it is ‘everywhere in our veins.’ Rubin’s poetry goes to work, enacting what Goethe called, “active seeing”—joining the observer to the observed, resolving subject and object in an experience of poetic perception.” —Asa Boxer, author of The Narrow Cabinet

"What does it mean to grieve for a glacier? Iceland Is Melting and So Are You takes readers into the right now of the climate crisis, where the daily 'thunder of collapse' is deafening, yet too often ignored. Like a drill through an ice floe, Rubin pierces the numbing layers of human denial and selfish desire, reminding us that we, too, are saltwater. At once urgent and elegiac, these poems insist that we feel, fiercely, our 'great belonging to the earth.'" —Claire Caldwell, author of Gold Rush

Other titles by Talya Rubin