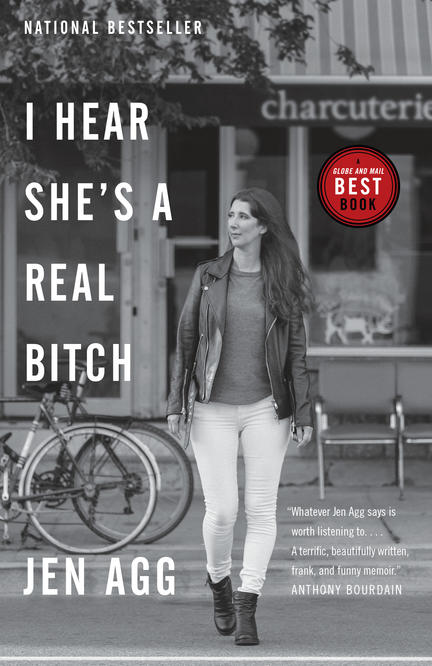 A sharp and candid memoir from a star in the restaurant world, and an up-and-coming literary voice.

Toronto restaurateur Jen Agg, the woman behind the popular The Black Hoof, Cocktail Bar, Rhum Corner, and Agrikol restaurants, is known for her frank, crystal-sharp and often hilarious observations and ideas on the restaurant industry and the world around her. Agg's first book, I Hear She's a Real Bitch, is caustic yet intimate, and wryly observant; an unforgettable glimpse into the life of one of the most interesting, smart, trail-blazing voices of this moment.

JEN AGG is a restaurateur in Toronto, and owner of The Black Hoof, Grey Gardens, Rhum Corner, and Cocktail Bar in Toronto and Agrikol in Montreal. I Hear She's a Real Bitch is her first book.

"Whatever Jen Agg says is worth listening to. As owner of Toronto's excellent The Black Hoof, she's one of the most vocal and interesting observers of the peculiar subculture of the restaurant business. I Hear She's a Real Bitch is the book a lot of us have been waiting for. A terrific, beautifully written, frank, and funny memoir, and a compelling argument for pulling down the long outdated system of 'bro' culture that has dominated the industry since what feels like the beginning of time." —Anthony Bourdain

"Jen Agg's I Hear She's A Real Bitch could help change restaurant culture. . . . Call her a bitch? She'll take the word and redefine it for you as an empowering adjective. Don't think workplace sexism is a real thing in restaurants? She'll organize a whole conference around the issue, as she did in the fall of 2015 after a Toronto pastry chef launched a human rights complaint over sexual harassment allegations at a King Street restaurant, and call it Kitchen Bitches. . . . If a generation of cooks followed Kitchen Confidential into the industry on the promised glory of good times and hard living, for largely different reasons—because restaurant ownership is so desperately lacking in diversity and because kitchen culture could sure use a change—with hope, I Hear She's a Real Bitch will do the same." —The Globe and Mail

"Jen Agg insists on being heard. Her plainspoken yet breathlessly disclosing memoir is compulsively readable, highlighting her natural gift for not just telling it like it is, but remembering with heart and with humor. Much like dining at one of her perfectly-lit restaurants, reading Agg is a full-blown experience of the senses. I am grateful for her voice and for how generously she storytells. I read I Hear She's a Bitch all the way through, in one sitting, only putting it down once near the end, so as to delay reaching its final pages." —Durga Chew-Bose, author of Too Much and Not the Mood

"Jen Agg has produced a memoir every bit as distinctive as her extraordinary restaurants. It is equal parts steel, grit, sass, TMI and analytic brilliance. Nobody is better at creating the modern bistro, a joint that's someplace, yet also relaxed; meticulous, but utterly without pretension. Agg, it turns out, has an ear to match her eye; she is a dismayingly good writer, and her book is a double how-to: how to be a garishly successful restauranteur; and how to be a semi-completed human being. She has brought every bit of her unique verve to I Hear She's a Real Bitch. (PS: She can be, but she really isn’t.)" —Stephen Metcalf, critic-at-large at Slate and host of the Culture Gabfest podcast

"The culinary world needs more Jen Aggs. . . . If you don't know the name Jen Agg, consider this your notice: It's time to meet her and hear her out." —Eater
"With equal parts feminist swagger and den-mother softness, Agg's compellingly conversational writing breaks new ground in the (typically macho) canon of restaurant memoirs by exploring the often-dysfunctional relationship between the front and the back of the house." —Maclean's
"Warning: Do not start Agg's memoir before attempting to go out / make dinner / do any chores. You won't be able to stop reading." —Elle Canada

"Agg wills her cunningly designed restaurants almost out of thin air. I say almost because this book is also an homage to her parents, who gave their electric daughter, through a brilliant, hands-off supportiveness, the mental freedom to somehow invent her own life pattern without a map for where to drill down. The message they sent her, which she in turn sends us through this full-bodied, generous book, is, as they say in Canada: 'Just go for it, eh.'" —Elle
"I Hear She's a Real Bitch tells the story of how Jen Agg fought her way through the patriarchal service industry and made it happen, from getting her first job pouring drinks all the way to starting Toronto's culinary revival and running some of Canada's most famous restaurants. Agg's frank and often hilarious observations on an industry in which sexism has been normalized, her memoir is more than just a story about starting a restaurant: it is a rallying cry for a feminist revolution in the culinary world." —Bustle

"Even if you've never eaten in one of Agg's restaurants, you've likely felt her influence on contemporary Canadian restaurant culture. . . . Agg's experience as both a key player and a ferocious critic of the bro-dominated restaurant world is the focus of her new memoir, a mash-up of personal narrative, female-empowerment tome and survival guide for women in hospitality." —Chatelaine
"A personal and motivating memoir. However you feel about her, Agg proves she's a force to be reckoned with (and aspire to)." —National Post
Praise for Jen Agg:
• "[Agg] has wit and confidence and clout in an industry where most women don't speak out. . . . She recently wrote an op-ed in The New York Times that eloquently and passionately described the misogynistic miasma of kitchens." —Toronto Life