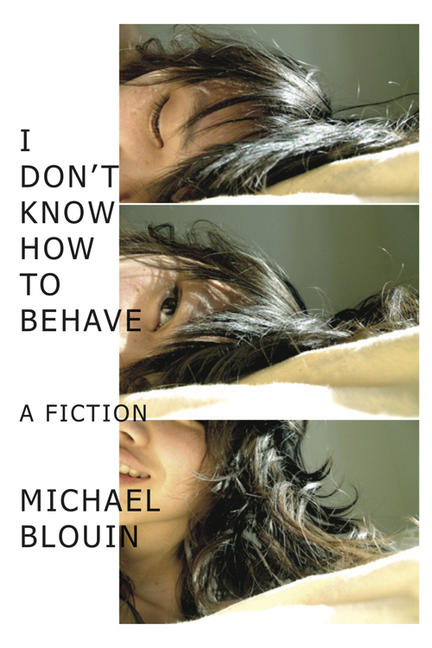 I Don't Know How To Behave combines the true story of Canadian daredevil and stunt driver Ken Carter (1938-1983) with imagined biographical elements from the lives of Canadian film director Bruce McDonald and Canadian poet Gillian Sze. Along the way, this quintessential Canadian story (told in a manner that has never been attempted before!) crashes head first into many related things, from screenplay theory to hip hop history to the story of early Canadian film to drawings to photographs to bank robberies to chaos theory to technical specs for Detroit muscle cars to re-imagined movies to imagined documentary to advertisements to newspaper interviews to instructions for making molotov cocktails to Evel Kneivel to Steve McQueen's Bullitt to self-help tomes to "Rappers Delight" to online instructions for how to publish a book, such as the one you are about to read called I Don't Know How To Behave by Michael Blouin.

Michael Blouin is a ReLit Award winning author for Best Novel in Canada, has been shortlisted for the Amazon First Novel Award, the bpNichol Award and the CBC Literary Award and is a winner of the Diana Brebner Award and the 2012 Lampman Award. He has been published in most Canadian literary magazines including Arc, Descant, Branch, Dragnet, The Antigonish Review, Event, Queens Quarterly and Fiddlehead, and has served as an adjudicator for The Ontario Arts Council, the Ottawa Book Awards, Carleton University, and This Magazine.

The book is more than amazing. I find lines that stop me, lines I want to write down, wise lines, sad lines, funny lines...more than lines, a whole universe to be marvelled at here.
ï?? Susan Musgrave

Take a few consecutive hours out of your life, and read, in one sitting, a book that is compelling, insightful, and thoroughly unconventional.
ï?? National Post

Michael Blouin does a particularly remarkable job ... effortlessly switching between poetry and prose ... this comes strongly recommended to the legitimately adventurous, those who enjoy not just reading manuscripts but climbing inside them, and examining the language found there much like kicking the tires of a used car. It is bound to be loved.
ï?? Chicago Center for Literature and Photography

Think of is as a daily devotional. You can pick it up, open it at random, read a few lines, stop, and then ponder the mysteries of life. Tomorrow and the next day, the experience can be repeated; a few more lines can be savoured.
ï?? The Telegraph Journal

Other titles by Michael Blouin

I Am Billy the Kid