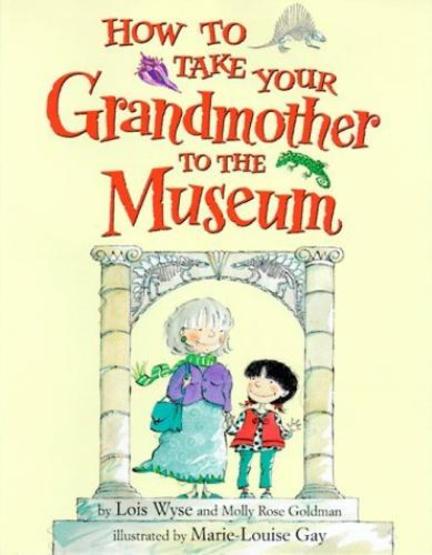 Illustrated by Marie-Louise Gay. Usually it's the grandparent who takes the grandchild out. But here roles are reversed in a heartwarming story about a little girl who takes her grandmother to the museum for her first visit, allowing them to share something very special together. Written by Lois Wyse, the bestselling author of Funny, You Don't Look Like a Grandmother, with her ten-year-old granddaughter, Molly Rose Goldman, How to Take Your Grandmother to the Museum is a charming story of an adventurous little girl and her willing and eager grandmother, and the things they discover during a museum outing together. They visit Apatosaurus, whose bones are even older than Grandma's, and put on their pretend hiking boots for a trek to the Arctic. They imagine elephants trumpeting in the African Hall and travel through time to the Ice Age. How to Take Your Grandmother to the Museum mixes photographs with Marie-Louise Gay's whimsical illustrations for a realistic view of the museum, and includes two pages of additional information about the exhibits. But most of all, it's about that very special relationship between grandparent and grandchild, and how the young can often lead grown-ups to the joy of unexpected insight.
,
By the author of Funny, You Don't Look Like a Grandmother and other books, with over 4.5 million copies in print. For children ages 5-8.

Molly Rose Goldman, age 10, is one of Lois Wyse's nine grandchildren. She lives not too far from the American Museum of Natural History in New York City, where her favorite exhibits are in the Hall of Meteorites and the Hall of Gems.

Lois Wyse is perhaps best known as the author of Funny, You Don't Look Like a Grandmother. She's written many other books, including Grandchildren Are So Much Fun I Should Have Had Them First, You Wouldn't Believe What My Grandchildren Did, and, most recently, Just Like Grandma Used to Make. She lives in New York City.