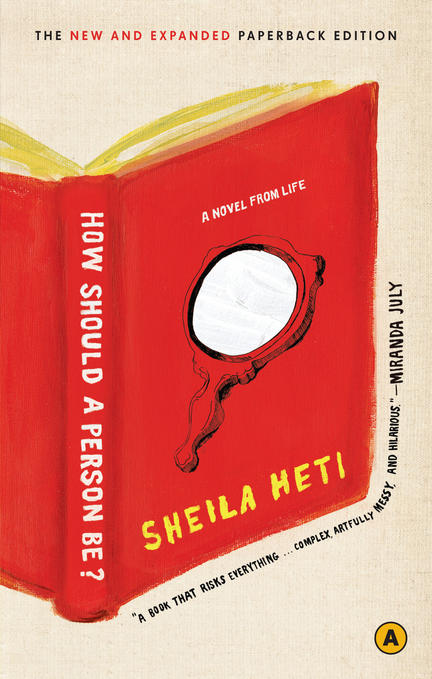 Longlisted for the Women's Prize for Fiction, and selected as a New York Times Notable Book and Huffington Post Best Book

From the internationally acclaimed author of The Middle Stories and Ticknor comes a bold interrogation into the possibility of a beautiful life. How Should a Person Be? is a novel of many identities: an autobiography of the mind, a postmodern self-help book, and a fictionalized portrait of the artist as a young woman — of two such artists, in fact.

For reasons multiple and mysterious, Sheila finds herself in a quandary of self-doubt, questioning how a person should be in the world. Inspired by her friend Margaux, a painter, and her seemingly untortured ability to live and create, Sheila casts Margaux as material, embarking on a series of recordings in which nothing is too personal, too ugly, or too banal to be turned into art. Along the way, Sheila confronts a cast of painters who are equally blocked in an age in which the blow job is the ultimate art form. She begins questioning her desire to be Important, her quest to be both a leader and a pupil, and her unwillingness to sacrifice herself.

Searching, uncompromising and yet mordantly funny, How Should a Person Be? is a brilliant portrait of art-making and friendship from the psychic underground of Canada's most fiercely original writer. This paperback edition features new and expanded content.

[I'm] in awe of this new Toronto writer who seems to be channeling Henry Miller one minute and Joan Didion the next.

An engaging mashup of memoir, fiction and philosophy... It doesn't answer the question, how should a person be? But it does find an engaging new way of asking it.

How Should a Person Be? is a question to be revisited by the author herself, or another writer, or many other writers - but it's also the question novels were invented to respond to.

... bound to be quoted over and over ... Sheila Heti does know something about how many of us, right now, experience the world, and she has gotten that knowledge down on paper, in a form unlike any other novel I can think of.

...a self-conscious, darkly funny exploration of the strained complexities of female friendship, the makings of bad art, and the finer points of awkward sex...[Heti] celebrates the extraordinary imperfection in ordinary life.

Original, contemplative, and often tangential, this is an unorthodox compilation of colorful characters, friendship, and sex that provides an unusual answer to Heti’s question.

... one of the bravest, strangest, most original novels I’ve read this year.

...an unforgettable book: intellectually exacting, unsettling in its fragility, bodily as anything painted by Freud, experimental yet crafted as hell, and yes, very funny.

Ms. Heti's deadpan, naked voice is what makes Sheila's journey so engaging... throughout, the reader is beguiled by blunt, sly observations. It is easy to see why a book on the anxiety of celebrity has turned the author into one herself.

How Should a Person Be? reveals a talented young voice of a still inchoate generation.

Heti does have a wicked sense of humour and some of her one-liners are genuinely laugh out loud.

This is a novel that wonders if the ugly can be beautiful, if there is clarity to be found in the drifting.

[Heti's] lack of self-censorship [gives] the prose an irrefutable force.

…there is something in her story that will resonate with every reader, as Heti's honest rendition of some of life's most humbling truths challenges the novel as we know it.

This is a novel that abounds with [...] wisdom, arrived at in fresh and new ways. For all its inventiveness, there is an old-fashioned integrity, an attention to thought in the prose, resulting in unusual and sharp-eyed observations . . . we are treated to some truly profound ruminations on what it means to be an artist in our indifferent era.

Heti is ... capable of arresting sentences that feel utterly now...

Heti flails out in all directions, employing a winsome flexibility and an underlying sadness that deflates any pretension and focuses on the big questions of life. The exuberance of youth is shot through with magic threads of wisdom.

[Sheila Heti is] a brilliant, original thinker and an engaging writer.

... what Heti’s brain and fingertips offer are expanded possibilities for what the novel can be and can become ... How Should a Person Be? makes curious and combative company.

From pithy quotables ('Night fell, but then, there are always holes to fall into,') to the oddly profound ('If now in some ways I drink too much, it's not that I lack a reverence for the world'), this is a novel that rewards reading, sitting with, and rereading.

...a portrait of the artist as a young woman, a postmodern self-help book and an autobiography of the mind.

... boldly original ... [Heti] writes cinematically, but with the cockeyed emotional realism of filmmakers like Miranda July and Lena Dunham.

Sheila Heti's vaguely autobiographical new novel might make her the Joan Didion of the 'Girls' generation.

[Heti's] book has a freshness and verve that make you wonder where she will go next.

...the good kind of genre muddle...How Should a Person Be? emerges as part of an entirely different genre: the realistic self-help book. You might not want to follow in Sheila's footsteps, but tagging along on her quixotic mission will be as useful as anything else you're likely to read this year.

How Should a Person Be is not for everyone. Heti’s experimental and provocative novel will resonate as a dimensional, funny and honest look at identity, art and friendship. Recommended for those who like their post-modern existential identity crisis novels couched in sex, drugs and party dresses.

A Memoir of Childhood

Nisha Coleman and Busker: Stories from the Streets of Paris

Coleman's memoir shows the City of Love like you've never seen it before.