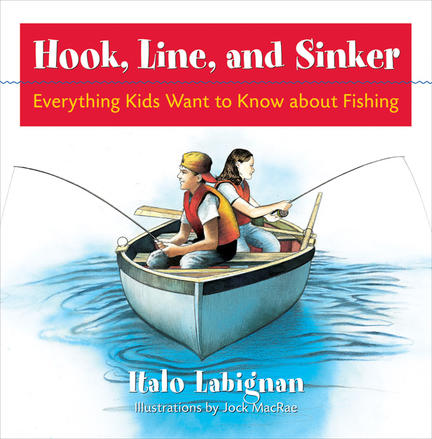 A day by the water will never be the same again!If youve ever had the pleasure of reeling in your very own catch, you already know how much fun fishing can be. If you have yet to land your first big one, you dont know what youre missing! All over the world, people who live near the water go fishing. Why? Because its fun! Theres nothing quite like the tug of a bite on your line, or the thrill of the fight as you struggle to reel in your catch. But like any sport, theres more to fishing than first meets the eye. There are all kinds of tricks and techniques that can help make your fishing experience more enjoyable. In Hook, Line, and Sinker, fishing expert Italo Labignan takes you on a journey through the wild world of fishing. Accompaied by spectacular full-colour illustrations and photographs, Labignans step-by-step instructions cover the basics of sportsfishing, from important safety information to fun facts and tips. Youll learn how to: Select the appropriate bait or tackle Figure out what kind of pole, rod, or reel to use Cast for, reel in, and release your catch Fillet a fish (ifyou want to!) Featuring cool activities (constructing a tackle box, catching your own bait, and making lures) and a handy reference guide to fresh and saltwater fish, Hook, Line and Sinker will transform eager beginners into full-fledged anglers.

ITALO LABIGNAN is a well-known fishing professional and the Editor of Canadian Sportfishing Magazine. He graduated from Sir Sandford Fleming College as a Fish and Wildlife Technician and gathered three years of experience with Canada’s Ministry of Natural Resources. He went on to become a professional taxidermist as well as a successful tournament angler. In the late 70’s and early 80’s, having an extensive background in Canada’s outdoors, Italo pursued a career as an outdoor writer and started his promotional work representing several leading fishing tackle and outdoor equipment manufacturers. By the mid 80s, he gained enough public speaking experience, presentation skills, and notoriety that he became in high demand for assisting companies who were looking to obtain high quality fishing and outdoor video footage. By 1985, Italo pioneered a concept for his own sport fishing television series that would set a new standard of quality on Canadian television, and for the first time would combine conservation and education with entertaining fishing action. In the fall of that year, a pilot was produced for the Canadian Sportfishing Show. The new network TSN immediately picked up the series. The series was so well received across Canada that TSN broadcast 26 original episodes even in its first season. Canadian Sportfishing has continued to be broadcast 3-times a week, 52-weeks of the year, for the last 16 years on TSN. In 1985 Canadian Sportfishing Productions Inc. was established and within two years it started developing several other divisions and productions. By the early 90s, it became the largest ‘outdoor communications’ company in Canada. Italo developed several other TV series, published books, operated a travel division, published Canada’s only national sport fishing magazine and annually was the presenter in many special events that would attract thousands of spectators. Italo is a founder and partner of Canadian Sportfishing Productions Inc. He continues to be an integral part of the television, commercial and industrial production division. His hands-on learning has given him the ability to come up with production concepts, the ability of organizing and coordinating production units and very efficiently executing them. He is familiar with every facet of Canadian Sportfishing Productions Inc. and continues to be the host of the Canadian Sportfishing show and executive producer to the production division, and also gives leadership in the directions that the company is expanding in. He lives with his wife Barb, and has four children; Amanda, John, Jessica and Patricia.

Other titles by Italo Labignan

Other titles by Jock MacRae

Kids Book of Canada, The

The Kids Book of Canada