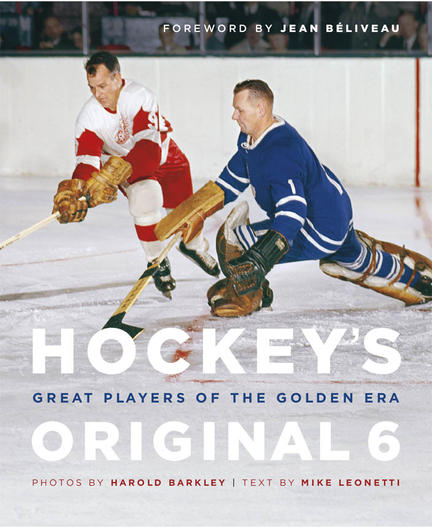 An electrifying collection of rarely seen hockey photos highlighting the greatest heroes of the Original 6 era.

The hockey stars of the fifties and sixties -- Rocket Richard, Gordie Howe, Dave Keon, Bobby Hull, Jean BÈliveau, Terry Sawchuk, Tim Horton, and others -- were some of the most passionate players in NHL history. These skilful and often colourful athletes played exhilarating hockey and were national heroes in a time when only six hockey teams and 120 players battled for the Stanley Cup.

Hockey's Original 6 celebrates the most dynamic players and exciting moments of the era in more than 100 photographs from the legendary Harold Barkley Archives, including a number of never -- or rarely -- seen images. From 1942 until the early seventies, Barkley was the Toronto Star's leading sports photographer, pioneering the use of electronic flash to capture stop-action hockey. This book is the most complete collection of pre-expansion-era colour action hockey photos available in print.

Mike Leonetti has written numerous books for both children and adults about the good ol' hockey game. His current picture book series with Scholastic is about hockey heroes and includes titles such as Crosby's Golden Goal, The Rocket, and The Mighty Tim Horton. A lifelong Toronto Maple Leafs fan, Mike lives in Woodbridge, Ontario, with his wife and son.

Other titles by Mike Leonetti

Great Players of the Golden Era