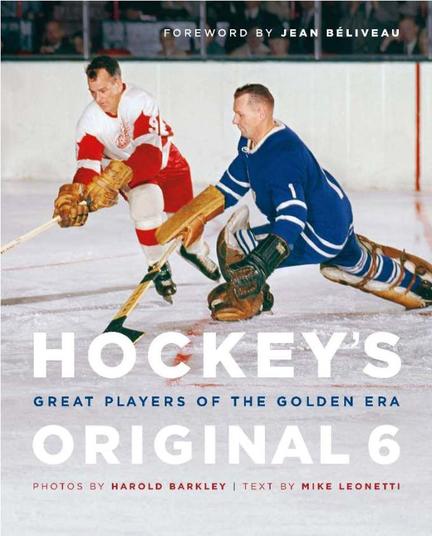 An electrifying collection of rarely seen hockey photos highlighting the greatest heroes of the Original 6 era.

The hockey stars of the fifties and sixties—Rocket Richard, Gordie Howe, Dave Keon, Bobby Hull, Jean Beliveau, Terry Sawchuk, Tim Horton, and others—were some of the most passionate players in NHL history. These skilful and often colourful athletes played exhilarating hockey and were national heroes in a time when only six hockey teams and 120 players battled for the Stanley Cup.

Hockey's Original 6 celebrates the most dynamic players and exciting moments of the era in more than 100 photographs from the legendary Harold Barkley Archives, including a number of never—or rarely—seen images. From 1942 until the early seventies, Barkley was the Toronto Star's leading sports photographer, pioneering the use of electronic flash to capture stop-action hockey. This book is the most complete collection of pre-expansion-era colour action hockey photos available in print.

Mike Leonetti has written numerous books for both children and adults about the good ol' hockey game. His current picture book series with Scholastic is about hockey heroes and includes titles such as Crosby's Golden Goal, The Rocket, and The Mighty Tim Horton. A lifelong Toronto Maple Leafs fan, Mike lives in Woodbridge, Ontario, with his wife and son.

The classic hockey biography, fully updated: all new material on a decade of personal challenge and a troubled game, with a new introduction by Wayne Gretzky.

For close to twenty seasons, Jean Beliveau was le Gros Bill, "the gentle giant" centreman and captain of the fabled Montreal Canadiens during the team's glory years in the 1950s and 1960s. Retiring from active play in 1971, he went on to a successful twenty-two-year career as the Canadien's senior vice-president of corporate affairs and to life-long service as a goodwill ambassador for the sport. For half a century, he has been universally acknowledged as a prince of our national game and unofficial royalty to four generations of Canadians.

Harold Barkley was a pioneer of sports photography. Covering three decades worth of NHL hockey for the Toronto Star during the golden era of the Original Six, he was the first to use an electronic flash to take stop-action hockey pictures and he developed special equipment for shooting colour.

A worthy opponent to the Hockey Hall of Fame Treasures for most beautiful volume of the season, it features the timeless work of hockey action photo pioneer Harold Barkley, with text by Mike Leonetti. Barkley introduced flash photography to hockey in the 1950s and forever changed the way the game was seen, his lens trained on players before they became shrouded in goalie masks and helmets. His gloriously detailed images of the day's greatest stars make this book a must for fans of pre-expansion hockey. —Vancouver Sun

For all the book-bound Barkley collections, each out of print and available only from secondhand sellers, Hockey's Original 6 is the only one that will take your breath away . . . this Greystone title is by far the most brilliantly printed assembly of Barkley photos. It is a collection that captures players' grimaces, suture tracks, missing teeth and Brylcreem-lacquered hair; their primitive equipment, joy and considerable pain, even the depth of snow beneath their tubular-steel blades, the individual planks of lumber that were the arena boards, and the octagonal orange crests on the Tyer Rubber Co. pucks whose impact has smudged the fire-engine-red goalposts. —Dave Stubbs, The Montreal Gazette

Hockey historians will appreciate the precision action shots taken of the first cohort of NHL stars by the late Harold Barkley, sports photographer for the Toronto Star from 1942 until the early 1970s. Passionate hockey writer Mike Leonetti captions the black-and-white as well as colour pictures with crisp, rich descriptions. This book is sure to please. It is a record of how hockey has evolved. —Harriet Zaidman, Winnipeg Free Press

Mike Leonetti's informative text is complemented by the action photos of Harold Barkley . . . Flipping through the pages of Hockey's Original 6 and looking at Barkley's wonderful photographs I was taken back to my childhood when hockey photos like these graced the pages of magazines, newspapers and books . . . Fans of hockey during its golden era will enjoy this book. —Simcoe.com

Other titles by Mike Leonetti

Great Players of the Golden Era

Other titles by Jean Beliveau

My Life in Hockey

Other titles by Harold Barkley