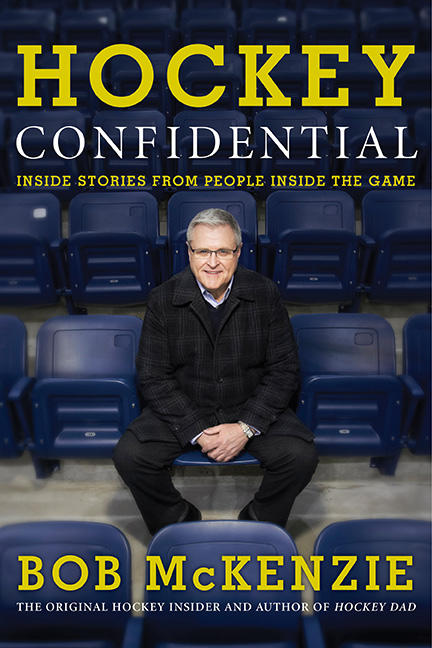 Your all-access pass to the NHL

When it comes to hockey, Bob McKenzie is one of the most trusted voices in the game. No one else has the access or depth of experience. Now, in his first book on the NHL, Bob takes you behind the scenes, covering the inside stories, some lesser-known personalities and the life experiences that help to shape this great game.

Bob McKenzie, whose life revolves around all things puck, shares plenty here for every hockey fan. He reveals the colliding worlds of old and new in the growing debate on the place of advanced statistics—from a guy who barely escaped grade 12 math—and tells the hilarious real story of how Corsi got its name. He talks to John Tavares on the essence of scoring goals and to Brandon Prust on what it’s really like to give or take punches in a hockey fight with NHL heavyweights. He writes about Sheldon Keefe’s dramatic personal struggle to leave behind a dark and troubled past to become a better man, son, brother, husband, father and hockey coach. Bob stands with Don Cherry and his son and hockey scout, Tim, at the rink during cherished family time. He talks to Gord Downie of the Tragically Hip about communing with brothers in a lifelong love affair with the Boston Bruins. He also talks to the patriarchs of the Subban and Tavares families about emigrating from Jamaica and Portugal, respectively, to raise great Canadian superstars. And he spends time with the McDavids, who reveal how Connor counts on his family and support system, including the incomparable Bobby Orr, to help cope with the pressures of being tabbed hockey's Next Big Thing.

“A fascinating look into the lives of people in hockey that only Bob McKenzie can tell.” —SCOTTY BOWMAN

“If Bob McKenzie says something, you know he has checked it out. He is thorough, well informed, always interesting. On TSN’s panel he sets the standard. He makes everyone around him better. People tell stories like those in this book only to someone they trust.” —KEN DRYDEN

“Bob McKenzie has been around the game for a long time. His knowledge and insight comes from passion and experience. His behind-the-scenes stories will be of interest to all hockey fans.” —SIDNEY CROSBY

“Nobody in the hockey world is more plugged in to the biggest news than Bob McKenzie. But in this book, he shows a flair for great storytelling, and the result is a collection that all hockey fans will find themselves glued to.” —SEAN MCINDOE, GRANTLAND