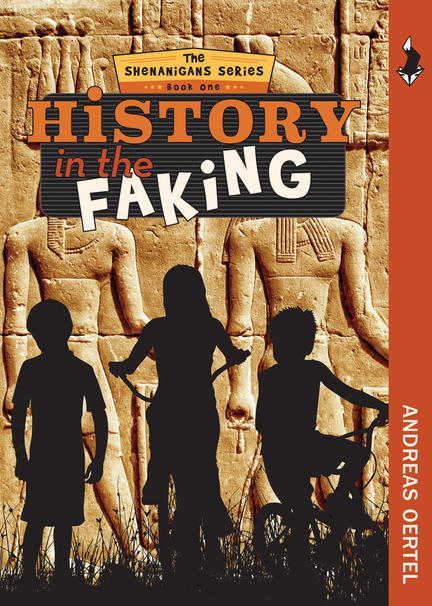 Life is getting more dismal by the minute in the town of Sultana, Manitoba. Thanks to a dry season that nearly dried up the river, no one wants to camp there anymore. There aren’t enough tourists to keep the local restaurant busy and, if Cody’s best friend’s mom loses her job there, the family will have to move away.

Cody, his best friend, Eric, and Eric’s twin sister, Rachel, concoct an elaborate hoax that transforms this tiny town into a hotbed of activity—a hoax involving an “ancient Egyptian” tablet discovered in Sultana. Soon the tourists come flooding back, but Cody, Eric, and Rachel discover that they should have been more careful about what they wished for. This quirky caper will appeal to children aged eight to ten.

Andreas Oertel has travelled all over the world and had a hundred different jobs -- everything from rickshaw driver to health inspector -- but his favourite occupation is writing. His middle grade fiction is critically acclaimed and has been nominated for several awards, including the Silver Birch Award, Manitoba Young Reader's Choice Award, and Charlotte Award. Andreas spends much of his free time visiting schools, and in 2012 and 2013 he was Writer in Residence at Lac du Bonnet's Centennial School. He lives with his wife, Diane, next to the Lee River in Manitoba.

“The far-fetched story, intended as pure fun, succeeds as a fast-paced archeological adventure, the first of a planned series." —Kirkus Reviews

“Andreas Oertel sets a brisk but not overly rushed pace early in the novel and never lets up, placing a series of increasingly complicated obstacles and mysteries in his portagonists' path until the cinematic conclusion. Oertel has laid the foundation for a fun, engaging series for adventure and history buffs." —Quill & Quire

“A fabulously fun series that ... will appeal to boys and girls alike." —The Literary Word

“Kids with a soft spot for Indiana Jones-type adventure will eat up the book which brings ancient Egypt to smalltown Manitoba." —Cindy McGlynn, Movie Entertainment

“A Fun adventure filled with short chapters, mystery, and suspense. The characters are well-developed, the plot is unique, and the background research is accurate." —Jennifer Wardip, Goodreads

“History in the Faking is great fun! The kids are resourceful but believably so, smart but not too smart. A good, solid, well-written adventure story that kids will really enjoy. So will their parents." —Mary Thomas, CM Magazine

Other titles by Andreas Oertel