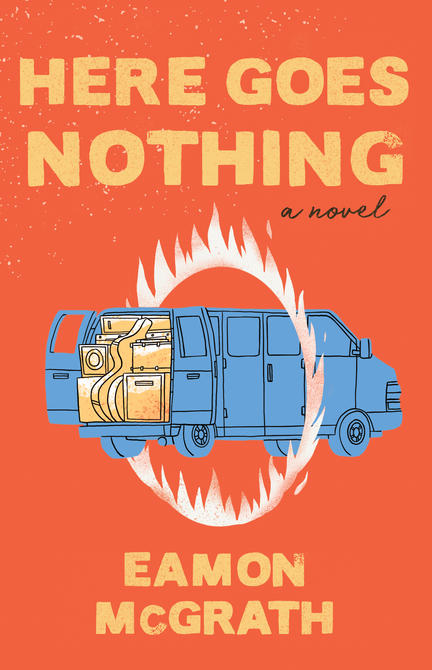 From Eamon McGrath, award-winning musician and author of the widely acclaimed Berlin-Warszawa Express, comes a smart and gritty novel that explores the lives of touring musicians

Here Goes Nothing, Eamon McGrath’s brave second offering and follow-up to 2017’s widely acclaimed Berlin-Warszawa Express, once again explores the world of touring musicians — but this time McGrath expands his scope and perspective from the inner dialogue of a traveling songwriter into the wider range of a multi-member touring band.

Told in two interwoven narratives that blur the lines between past and present, Here Goes Nothing explores the complex relationships that are both created and destroyed by the perpetual-motion engine that is the touring van.

From confessional tales of saving friends and oneself from drowning in polluted lakes in Michigan to legendary liver-wrecking nights of excess and debauchery in Lisbon, McGrath comments on the corrupt and selfish music industry and the toll it takes on musicians as they blindly chase success. Here Goes Nothing is a gutsy story of how life on the road can bring a band together — or tear them wildly apart.

Seven full-length records, multiple continent-spanning tours, and a critically acclaimed work of fiction lay in the wake of 31-year-old Eamon McGrath, whose fierce attitude and work ethic has led him to develop a career that could rival anyone 20 years his senior. He is based in Toronto, Ontario.

Excerpt: Here Goes Nothing: A Novel (by (author) Eamon McGrath)

We had a superstition at the time that you couldn’t clean the van until the tour was over, so by the time we’d crossed the border westward and slingshotted around the Golden Horseshoe towards home, we were up to our necks in an ocean of garbage. In our minds it was the same as shaving a playoff beard. Stained blankets, liquor bottles, half-eaten bags of potato chips, rotten food, filthy clothes, rumpled sleeping bags, and who knows what else forming a cemented, solidified wall around our bodies in their seats. Whenever we’d pull up to a venue, an avalanche of empty beer cans and two-sixes would come rushing out of the shotgun side door as it opened. Chaos in our wake as always.

For this and every cardinal sin we’d commit before, during, or after a show, we’d have that sacred half hour onstage every night to seek forgiveness. Despite the harrowing feeling of guilt deep inside me, for every poor, desperate gas station attendant running horizontal through the rain, I knew that I’d be back in Ottawa, and all those cities that we’d passed through to get there, in no time, with numerous opportunities to be redeemed.

“Eamon McGrath’s life-on-the-road novel, Here Goes Nothing (ECW) describes the euphoria and masochism that fuels the band on tour” — Globe and Mail

“Tales from the tour van are never bad if the band is good. Here Goes Nothing took me on a journey back to being young, and out lost somewhere in the beauty of the gnarl. The road. I needed to read this book much more than I thought. It’s the powerful prose with beer still on its breath that makes it incredibly impactful and real.” — Matt Mays, Juno Award-winning songwriter

“Here Goes Nothing is a dizzying ode to the allure and the disillusionment of life on the road. In his second book, McGrath smashes open a decade’s worth of bottled emotions. The grudges are toxic and the hangovers are abysmal but his vulnerable moments of clarity are worth the endured chaos.” — Leah Fay Goldstein, July Talk

“In his latest novel, Here Goes Nothing, Eamon McGrath is doomed to relive the same scenarios over and over again. It’s much like the movie Groundhog Day, except that in McGrath’s case the musician and author is pulling inspiration from real-life touring adventures.” — Tom Murray, Edmonton Journal

Other titles by Eamon McGrath

Listen Up: New Books About Music

A round-up of great new books about music and musicians.