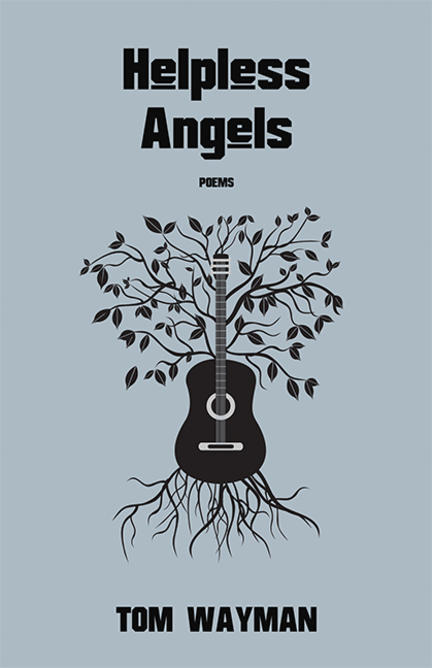 Helpless Angels weaves several themes together: music’s impact on a life, expressed through memory; poems that are like songs; music found in or described through nature; poems that directly consider music’s power; and, as a counterpoint to how music carries us through life, how art — and each of us — deals with significant loss: the death of a loved one. Helpless Angels looks at a long-term development — the ubiquitousness of widespread personal access to music performed by others that began in the 1950s and has continued to expand ever since. The collection explores via the medium closest to music, poetry, and a number of the delightful or at least positive dimensions to this enormous change in the fabric of people’s everyday lives.

All people have incorporated music into their lives individually as well as socially as when they gather for celebrations like weddings, birthdays, and church service or when they gather at funerals, or to send off soldiers to war. There is little that music doesn’t touch. In the written arts, poetry, of course, has long been the source for song and its intricate structures have been the layman’s access to the complexities of rhythm and meter. The connections between poetry and music run deep and offer engaging opportunities for readers.

Wayman’s Helpless Angels also reminds us that many of us are from the generations that have been able to listen, anyplace and anytime, to our own choice of music performed by others. Thus, we are the first human beings who have been continually surrounded by music made by others all our lives. How this change has impacted us is a major focus of this book.

Tom Wayman was born in Ontario in 1945, but has spent most of his life in British Columbia. He has worked at a number of jobs, both blue and white-collar, across Canada and the U.S., and has helped bring into being a new movement of poetry in these countries--the incorporation of the actual conditions and effects of daily work. His poetry has been awarded the Canadian Authors' Association medal for poetry, the A.J.M. Smith Prize, first prize in the USA Bicentennial Poetry Awards competition, and the Acorn-Plantos Award; in 2003 he was shortlisted for the Governor-General's Literary Award. He has published more than a dozen collections of poems, six poetry anthologies, three collections of essays and three books of prose fiction. He has taught widely at the post-secondary level in Canada and the U.S., most recently (2002-2010) at the University of Calgary. Since 1989 he has been the Squire of "Appledore," his estate in the Selkirk Mountains of southeastern BC.

INCANTATIONS
I power a device on
A thin mist streams out
and expands, densifying as it infuses
my kitchen or vehicle cabin

Such music can resemble
a sweet odor that generates in me a yearning
for fulfillment, the way a blue delphinium or gladiolus
intrigues a bee

Or I experience the thickened presence as
the pulse and throb of a force field
curing weariness, dismissing
doubt: a propulsive urge

—or voices and rhythms
transistors conveyed to me: melodies
whose lyrics have proven for decades
companions, goads, consolers

—or the rousing secular hymns
whose righteous insistence accelerates me
ever-nearer those lucid dreams
of justice, freedom, social harmony

still elusive as the sorcery
by which these tones in any guise, and effected
by any implement, quickens
the haunted world

“Tom Wayman is the rare poet who has the ability to put our lives into verse in a way that helps us see ourselves and others with greater compassion and clarity, and while he does tread the poet’s usual turf—“love, nature, death” as he describes it—he finds poetry in the everyday, and particularly in our daily work. This is a remarkable collection of poems by a poet whose work is not just compelling because of the sweep and power of his language, but because of his insight into the joys, realities and challenges of being human.” — Don Sawyer, review of Built to Take It (2014), Industrial Worker Oct. 2014

“Always the poems are permeated by intense attention to justice or a sense of justice. Tom Wayman seems to say, ‘Yes, I care about who gets shafted and why, and through these poems I will make you care too.”
— Micheline Maylor, review of The Order in Which We Do Things (2014), Alberta Views June 2014

“As to be expected from a poet rooted in the political ethos of the underdog, this book is refreshingly short on angst and long on social interaction, political agitation, sensuality, lost love and utopian dreams. Passionate and lyrical by turns, didactic at others, insisting that ideals matter, that people must strive for more empathy and honesty, Wayman demands much of his readers. He leaves us, as always, with a fire in the belly and a smile on our lips.” — Sid Marty, review of Winter’s Skin (2013), Alberta Views September 2015

“Wayman uses words and images—the craft of twentieth century poetry—to cut through the steel irony and stylishness of these times and quietly expose the machinery that encloses and constrains us. Wayman’s strategy has always been to include himself at the heart of any critique. This strategy insures that the poems do not perform as rants; they are never simply prescriptive; they are always inclusive, open and self-questioning. The voice that delivers this material is a smooth, accessible voice that Wayman has grown into over such a long, rich career. Like a seasoned jazz saxophone player, Wayman leans back into the music he is creating because he has paid his dues: he has reached that point of grace in improvisation, a poise that takes years to acquire.” — John Lent, review of Dirty Snow (2012), Arc Poetry Magazine May 2013

Other titles by Tom Wayman

Watching a Man Break a Dog’s Back

Poems for a Dark Time

If You're Not Free at Work, Where Are You Free

Shadows We Mistake for Love

The Order in Which We Do Things

The Poetry of Tom Wayman