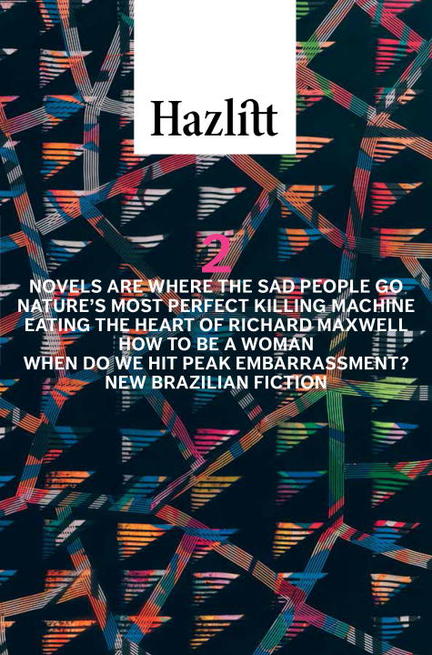 The second print edition of the popular, award-winning, online publication -- a handsomely art-directed digest magazine that mixes art, photography and literature with pop culture, comix and reporting on the news of the day. Hazlitt #2 is a grim but playful take on the idea of a summer reading issue.

What’s inside:
·       Heather O’Neill sets her house on fire
·       Lisa Hanawalt’s Tuca the Toucan checks into a hotel room
·       Tao Lin on your body as vessel or spaceship
·       The Black Notes of Owen Pallett
·       Franz Kafka's Josef K. is channeled through Justin Bieber
·       Nick Hune-Brown on the horrors of teenage embarrassment
·       Ebola: Nature’s most perfect killing machine
·       Linda Besner on arts funding in the U.S. and Canada
·       World Press Photo Prize-winner Donald Weber shoots the EuroMaidan revolt in Ukraine
·       Eating the Heart of Richard Maxwell—talking with the innovative playwright and theatre director
·       How to be a Woman, or, Lorrie Moore as the mother you never had
·       The Life They Planned For You: aerial photography by Christoph Gielen
·       Michael Deforge’s popular Leather Space Man comic
·       Poetry by Mary Jo Bang and David Hernandez
·       New Brazilian fiction by Daniel Galera and Fernanda Torres

CHRISTOPHER FREY is a National Magazine Award-winning writer and editor, much of whose work has focused on international reporting. He is the editor-in-chief of Hazlitt and Monocle magazine's Toronto correspondent.

JEREMY LAING is an internationally acclaimed clothing designer based in Toronto. Before launching his own eponymous line in 2005, Laing apprenticed under Alexander McQueen. In 2011 he was a finalist for France's prestigious ANDAM Fashion Award.

Other titles by Hazlitt Staff