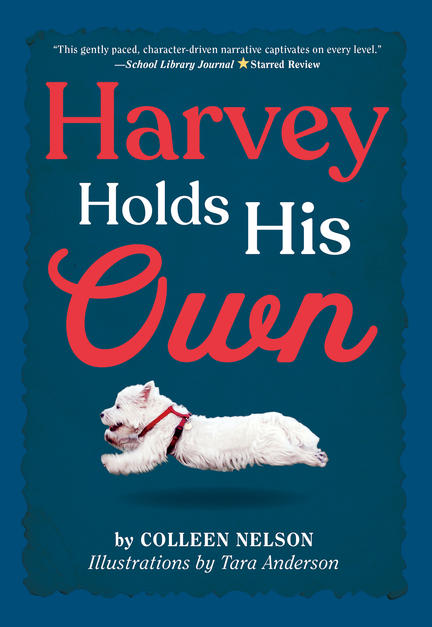 The West Highland Terrier that brought Harvey Comes Home to life returns with his tail wagging and his nose sharp, ready for a new adventure

Harvey the West Highland Terrier, hero of Harvey Comes Home, is back with his beloved Maggie. He is also back at Brayside retirement home, where he and Maggie now volunteer along with their friend Austin. There Maggie is drawn to a new resident, Mrs. Fradette, who tells stories of learning to fix cars as a twelve-year-old during the flood of 1950. Mrs. Fradette, with her bold fashion and love of poker, doesn’t fit in among the beige-cardigan-wearing, bridge-playing ladies of Brayside, but she doesn’t seem to care. Maybe that’s why Maggie likes her so much. Since seventh grade began, Maggie hasn’t been fitting in well with her friends, either.

Harvey has a problem of his own. He can smell an intruder in his yard, and he needs to find it. He is so intent on the nighttime fiend that he almost doesn’t notice how worried Austin is about his grandfather, who has been Brayside’s custodian for longer than Harvey has been alive. It seems like the retirement home is planning to give the job to a younger man, an injustice that Austin can’t let pass unchallenged.

In intertwining perspectives, Colleen Nelson tells four stories of individuals standing firm for what they know is right: Josephine Fradette, insisting on her right to become a mechanic; Maggie, certain that her friends’ expectations shouldn’t define who she becomes; Austin, indignantly campaigning against ageism; and Harvey, who has found his home at last and is determined to protect it.

An author and junior high school teacher who also enjoyed many years of teaching kindergarten, Colleen Nelson earned her Bachelor of Education from the University of Manitoba in her hometown of Winnipeg. Her previous works include the critically-acclaimed middle-grade novels Harvey Comes Home and Harvey Holds His Own; Sadia, which won the 2019 Ruth and Sylvia Schwartz Award; and Blood Brothers, which was selected as the 2018 McNally Robinson Book of the Year for Young People. Colleen writes daily in between appearances at hockey rinks and soccer fields in support of her two sports-loving sons. The family’s West Highland Terrier Rosie adds an extra-loveable dose of liveliness, squirrel-chasing, and shoe-chewing to their lives.

A folk artist and award-winning illustrator who trained at the Ontario College of Art and Design, Tara Anderson is known for her lively and humorous animal illustrations. Her most recent work includes spot illustrations of a quirky little hamster in Sapphire the Great and the Meaning of Life, and beautiful coloured-pencil illustrations of a boisterous family of rhinos in Rhino Rumpus. Her debut That Stripy Cat was followed with Nat the Cat Can Sleep Like That, which won the 2014 Preschool Reads Award and was nominated for the 2015 SYRCA Shining Willow Award. The antics of Nat and his kitten friend are inspired by the cats who roam her farmhouse in Tweed, Ontario, where she lives with her husband and daughter.

Praise for Harvey Holds His Own

“With the winning combination of a relatable main character and an adorable dog, this book should find a home with readers seeking a warmhearted tale of growth and connection.”—School Library Journal

“Heartwarming...Harvey Holds His Own is a charming novel whose important life lessons are bettered by the love of a good dog.”—Foreword Reviews

“With fantastic characters and unique perspectives, Harvey Holds His Own is a middle grade contemporary that will appeal to the preteen audience well. Great for animal lovers and middle schoolers dealing with evolving friendships.”—YA Books Central

“In a gently paced and heartfelt way, Nelson juggles three separate but intersecting story trajectories... Fans of the original and newcomers alike will relish the riveting friendship story contained within the pages of Harvey Holds His Own. Highly Recommended.”—CM Magazine

“Harvey is the star: a lovable, brave and resourceful little dog.”—Winnipeg Free Press

“Colleen Nelson’s touching and wonderfully layered sequel, Harvey Holds His Own, tells a story of change, connection, and courage....Along with delightful, expertly shaded illustrations by Tara Anderson, Harvey Holds His Own is a heartfelt and wholly enjoyable read that will leave you with the warmest of feelings.”—Band of MG Books

“Harvey is a great dog, and his interactions with the residents is very touching. Maggie’s friendship with Mrs. Fradette (and Mrs. Fradette’s vintage car!) really shine.”—Ms. Yingling Reads

“I love how Colleen Nelson tells this story in three different voices....There is such a wonderful cast of characters in this book, especially all of the seniors at Brayside. Colleen Nelson has captured so many different personalities among the residents and has painted seniors in a way to inform young readers about all the knowledge, wisdom and life that can be learned from the older generation....This story will leave the reader feeling all warm and fuzzy inside and secretly hoping for another Harvey tale.”—Storytime with Stephanie

“I really enjoyed this book, as we see Maggie grow and venture into new experiences. She shows good character, and we learn a little about Winnipeg history as well.”—Canadian Bookworm

Other titles by Colleen Nelson

If You Can Dream It, You Can Do It

The Life and Deaths of Frankie D.

Other titles by Tara Anderson

Sapphire the Great and the Meaning of Life