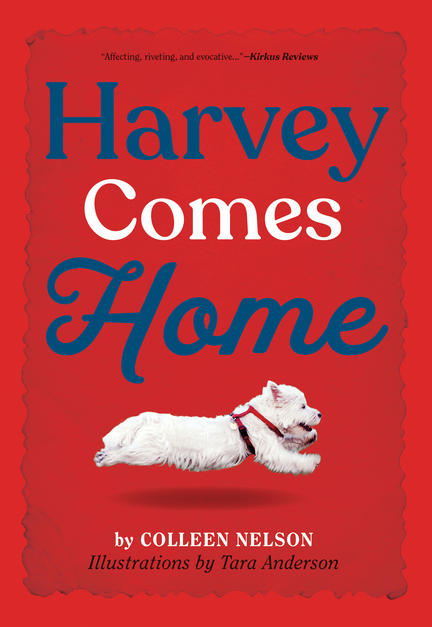 An adventurous West Highland Terrier follows his nose a little too far from home and becomes desperate for a helping hand. But when he’s taken in by a young boy volunteering at a retirement home, it just might be Harvey who does the helping.

A dog’s world is a world of scents, of adventure. When a runaway West Highland Terrier named Harvey wanders out of his old life guided only by his nose and his heart, lives begin to converge.

Austin, a young volunteer at Brayside retirement home, quickly finds that the audacious Harvey inspires Mr. Pickering, a bitter resident coping with memory loss, to tell stories of his childhood. Moved by the elderly man’s Dust Bowl recollections of grinding poverty and the perseverance of his friends and family, Austin begins to trade his preconceived notions for empathy. But is it enough to give him the resolve to track down Harvey’s original owner?

An author and junior high school teacher who also enjoyed many years of teaching kindergarten, Colleen Nelson earned her Bachelor of Education from the University of Manitoba in her hometown of Winnipeg. Her previous works include the critically-acclaimed middle-grade novels Harvey Comes Home and Harvey Holds His Own; Sadia, which won the 2019 Ruth and Sylvia Schwartz Award; and Blood Brothers, which was selected as the 2018 McNally Robinson Book of the Year for Young People. Colleen writes daily in between appearances at hockey rinks and soccer fields in support of her two sports-loving sons. The family’s West Highland Terrier Rosie adds an extra-loveable dose of liveliness, squirrel-chasing, and shoe-chewing to their lives.

A folk artist and award-winning illustrator who trained at the Ontario College of Art and Design, Tara Anderson is known for her lively and humorous animal illustrations. Her most recent work includes spot illustrations of a quirky little hamster in Sapphire the Great and the Meaning of Life, and beautiful coloured-pencil illustrations of a boisterous family of rhinos in Rhino Rumpus. Her debut That Stripy Cat was followed with Nat the Cat Can Sleep Like That, which won the 2014 Preschool Reads Award and was nominated for the 2015 SYRCA Shining Willow Award. The antics of Nat and his kitten friend are inspired by the cats who roam her farmhouse in Tweed, Ontario, where she lives with her husband and daughter.

No Worries for Dog Lovers

You might be surprised how many kids read the ending first because they can't take too much tension--I was and am that kid and have surveyed many of my young readers to find out they are too. So I took great solace in the title which indicates no harm comes to Harvey, the spunky and loving Westie. With very cute illustrations by Tara Anderson and a stunning in-time-for-Christmas red hard cover design by Rebecca Bender, this would make a great read aloud for 8-100 year olds or an independent read for the 9-11 year old animal lover.

The three narrative strands of dog, owner and finder of the lost Westie--combine to give a perspective of the value of seniors and their stories as well as the value of all-accepting pets who inspire self esteem and foster intergenerational friendships.

Other titles by Colleen Nelson

The Life and Deaths of Frankie D.

Harvey Holds His Own

Other titles by Tara Anderson

Harvey Holds His Own

Sapphire the Great and the Meaning of Life