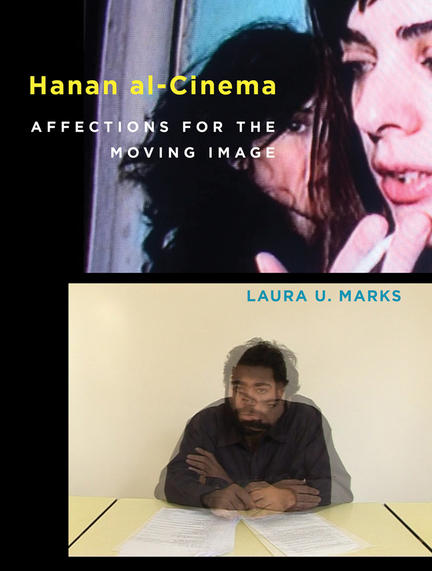 An examination of experimental cinema and media art from the Arabic-speaking world that explores filmmakers' creative and philosophical inventiveness in trying times.

In this book, Laura Marks examines one of the world's most impressive, and affecting, bodies of independent and experimental cinema from the last twenty-five years: film and video works from the Arabic-speaking world. Some of these works' creative strategies are shared by filmmakers around the world; others arise from the particular economic, social, political, and historical circumstances of Arab countries, whose urgency, Marks argues, seems to demand experiment and invention.

Grounded in a study of infrastructures for independent and experimental media art in the Arab world and a broad knowledge of hundreds of films and videos, Hanan al-Cinema approaches these works thematically. Topics include the nomadism of the highway, nostalgia for '70s radicalism, a romance with the archive, algorithmic and glitch media, haptic and networked space, and cinema of the body. Marks develops an aesthetic of enfolding and unfolding to elucidate the different ways that cinema can make events perceptible, seek connections among them, and unfold in the bodies and thoughts of audiences.

The phrase Hanan al-cinema expresses the way movies sympathize with the world and the way audiences feel affection for, and are affected by, them. Marks's clear and expressive writing conveys these affections in works by such internationally recognized artists and filmmakers as Akram Zaatari, Elia Suleiman, Hassan Khan, Mounir Fatmi, and Joana Hadjithomas and Khalil Joreige, and others who should be better known.

Laura U. Marks is Dena Wosk University Professor in the School for the Contemporary Arts at Simon Fraser University. She is the author of Enfoldment and Infinity: An Islamic Genealogy of New Media Art (MIT Press).

In Marks' poetic prose and unique theoretical assumptions we face a type of critique whose potential in today's world is yet to be fully discovered.—Mada Masr—

...this is a book that should be mandatory reading not just for every student of film or new media, but for anyone with an interest in the passionate, intelligent, and accomplished cinematic work coming out of the Middle East today.

Other titles by Laura U. Marks

by (author) Laura U. Marks

by (author) Laura U. Marks