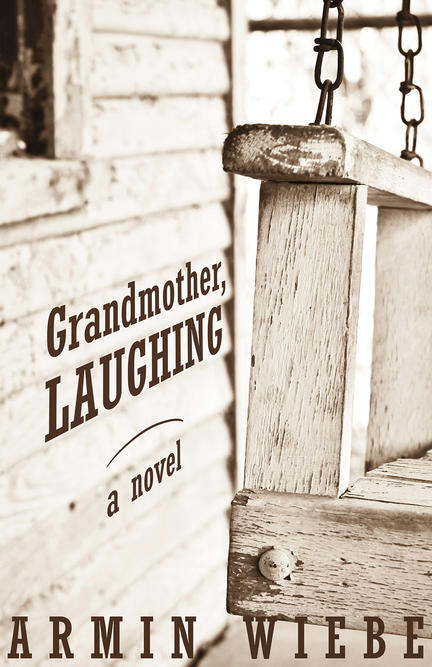 Until she met Obrum Kehler, serious Sarah Sudermann had never laughed. Her mother said she always reached for the black things first. As a young girl, she was haunted by a vision of her grandmother bolt upright in her black trough coffin, laughing so hard her bonnet slipped off to the side and hung from one ear. But then Obrum looked at her with his Robin’s egg eyes and red paint on his nose.

And then there was the lawnswing . . . and the piano. Not practical. Not necessary. Especially for a young couple struggling through the Great Depression. When Beethoven Blatz enters to tune their piano everything is in place for the Kehler family to make great music together.

Full of love, longing, and tenderness, Grandmother Laughing is a story about unconventional families and the lengths we will go to find fulfillment for ourselves and the ones we cherish.

Armin Wiebe is the recipient of the Margaret Laurence Award for Fiction and the McNally Robinson Book of the Year Award. He has five published novels, one play, and his short stories have appeared in numerous books and anthologies. A teacher for many years, Armin Wiebe is now retired and lives in Winnipeg, Manitoba.

Suaruh Suschtje, the children called me in school. Sour Sarah Sudermann. I was nineteen already that Sunday, but Suaruh Suschtje I still was when I sat across the table corner from Preacher Funk. From so close he looked young for a preacher, hardly older than I was, and he seemed nervous. Liestje laughered herself behind her hand, and Mamuh looked like she was biting her tongue. I think Preacher Funk must have been waiting for my father to start neighbouring, and Papuh said nothing, just passed the meat plate to Pete and nodded his head in the preacher’s direction. I thought maybe Mamuh would at least ask him if he wanted more carrots or potatoes with peel, but she had decided to let the men play this game.
I, of course, was too frightened to talk, and I wished the eating would finish so the preacher could get up and go away. Still, out of the corner of my eye, I was watching Preacher Funk’s hands cutting up the meat and peeling young skin off a potato. A patch of stubble beard under his jaw made me think of the weeds in the garden corner that I didn’t finish hoeing on Saturday. In the night I had dreamed I was hoeing in the garden, and a patch of fat hen just wouldn’t go away no matter how many times I hacked the weeds off and flipped them over to go wilted in the burning sun.
But there at the table my eyes watched the preacher’s hands, the tractor grease in the cracks, the blood blister under the thumbnail. Fuschtje Funk was a farmer, after all. His forefinger along the butter knife had a dark brown wart beside the middle knuckle. He stuck the knife into the middle of a tweeback bun and broke it open, even like Jesus I thought, and I wondered me if Jesus had used a knife to break the bread for his disciples. I watched him cut a sliver of butter and smear it over half the bun. Then he reached his knife over to the wild plum jam, and he skimmed a knifeful off the top and reached his bun closer so that the jam dripped onto the bun and not onto the tablecloth. He saw me watching and one of his eyes slowly closed, and I got this grizzlijch feeling in my stomach.
“By us we don’t smear double,” my father said.
Everybody stopped breathing. Preacher Funk’s face reddened down to his collar so the patch of stubble beard looked like a black checker on a red square. He didn’t speak, but he looked at the two halves of his bun, and then he scraped the jam off the butter onto the dry half-bun lying beside his plate.
I held my breath until after Papuh led the preacher into the sitting room. I had just tied on my apron to clean up the table when Papuh came back into the kitchen, his face white as the sofa dust cover in his hands. He waved me to come.
Again that Sunday kitchen was so quiet I could hear the flies’ footsteps on the tablecloth. What wanted these men with me? I had never sat alone with Papuh in the sitting room, and only if I was getting baptized would a preacher want to talk with me. Spring baptism was long past already and for sure I wasn’t marrying myself yet, so what was the hurry?
But in those days a daughter obeyed her father, so I went into the sitting room without even running upstairs to look in the mirror first. I didn’t breathe but I could feel my heart boompsing against my dress as I sat down on the first hard chair. That’s when I saw I still had my apron on.
Papuh had pulled open the curtain on the south window. Sitting with his back to the light, Preacher Funk was a shadow that reached across the floor to my Sunday shoes. My feet wanted to breathe, but on Sundays we had to wear our shoes inside. I could feel his eyes looking out of the shadow, and I wondered what he was thinking and I wondered if my hair was all fixed into place. Papuh sat down on one end of the soft sofa like it was a hard chair, knees together, hands lying on his legs.
I waited for somebody to say something to me, but for many minutes I heard only fuscheling from the kitchen and clicking back and forth from the grandfather clock.

Other titles by Armin Wiebe

The Salvation Of Yasch Siemens

Salvation of Yasch Siemens, The

Moonlight Sonata of Beethoven Blatz, The