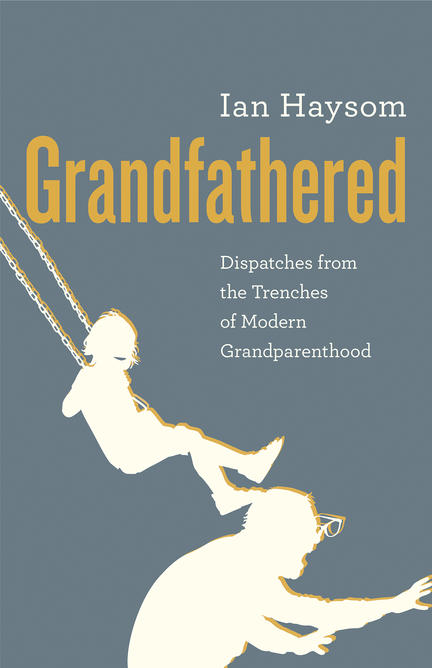 A sharp, funny, heartfelt memoir by a career-driven baby boomer who enters semi-retirement and explores the joys, challenges, and never-ending surprises of being a "young" granddad.

One summer, shortly after taking a step back from an illustrious journalism career, Ian Haysom found himself in charge of his first grandchild, Mayana, who was three at the time. As a healthy, energetic member of the baby-boom generation, Haysom did not consider himself a typical granddad. He was too young, too active, too cool for a role more often associated with denture adhesive commercials and afternoon naps. But as he soon discovered, grandparenthood is more rewarding, entertaining, and exhausting than he ever could have imagined.

Grandfathered chronicles Haysom's adventures with his grandkids Mayana, Emma, and Linden; explores the delightful and unexpected lessons they have taught him (and those he has attempted to teach them); and investigates the rapidly changing role of the grandparent in the twenty-first century. Through keen observations, hilarious anecdotes, and fascinating insights reminiscent of Bill Bryson (or "Bill Bryson with a touch of arthritis," as Haysom quips), this charming memoir will resonate with boomer grandparents everywhere.

Father of four, grandfather of four, and lifelong journalist Ian Haysom was born and raised in England and worked as a reporter for The Evening Standard before immigrating to Canada in the 1970s. He worked at several major Ontario dailies and eventually relocated to BC, where he rose to editor-in-chief at both the Vancouver Sun and Province. Moving to television in the 1990s, he became news director at CHEK-TV and later Global News. Now happily semi-retired, he continues to work as a news consultant.

"A humorous, touching, and engaging meditation on what it means to be a grandfather." —Terry Fallis, two-time winner of the Stephen Leacock Medal for Humour

"Grandparenthood is the most important period in our lives. Hard-won life lessons are a priceless legacy to the next generation and in passing them on, we are rewarded with nonjudgmental, unconditional love. Ian Haysom's delightful vignettes take us through the increasing number and ages of his brood of grandchildren and elicit chuckles, nods, and tears." —David Suzuki

"[Haysom] has a deceptively light touch, wry and cheerful, while finding insight in little human moments that will leave even non-grandparents nodding their heads in recognition." Jack Knox, Stephen Leacock Medal–nominated author of Hard Knox: Musings from the Edge of Canada and Opportunity Knox: Twenty Years of Award-Losing Humour Writing

"Ian's writing is full of love and humour and wonder at the miracle of grandparenthood. . . This book is a gift his grandkids will treasure forever." —Sophie Lui anchor, Global BC News Hour

"I couldn't put it down. A gifted writer that I read religiously in the Times Colonist, Ian Haysom has delivered a gem with Grandfathered. —Ed Bain, host of The Q Morning Show at 100.3 The Q! and CHEK TV Victoria Weather Guy

"One of the most thoroughly charming page-turners I've ever had the pleasure to read. You're going to enjoy this book, and you'll be surprised how many times it makes you laugh out loud or moves you to tears . . . often on the same page." —Ian Ferguson, author of The Survival Guide to British Columbia and co-author with Will Ferguson of How to Be a Canadian