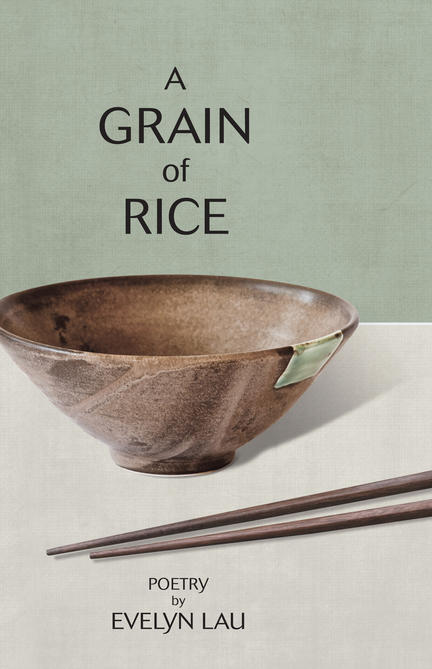 Evelyn Lau? new book of poems, A Grain of Rice, picks up on some of the themes she covered in her last wonderful book, Living Under Plastic. Once again she honours people, in particular family, and the past; the presence and importance of nature in urban spaces; the influence of other writers on her life and in her career as a writer. A Grain of Rice includes a passionate suite of poems that pay tribute to John Updike? life and work (he is the writer who has most influenced her writing career). Many of the poems in A Grain of Rice, her sixth book of poetry, are haunted by the deaths of friends and family. They explore cultural history, stories in the news, travel and place “especially the relationship between home and our nomadic inclinations. In many respects the book is a meditation on loss. Grief and aging, family history, an attention to place. poems on local urban social issues; poems that seek and find their inspiration in Asian culture and literature “all form a tapestry of faces that simultaneously defy and embrace the inevitable and celebrate the transformational.

Evelyn Lau has been publishing poetry and prose since she was thirteen. Now eighteen, she has her poetry appear in Prism International, Queen's Quarterly and Canadian Author and Bookman, among other literary magazines. Her prose has been published in MacLean's, Vancouver Magazine and The Antigonish Review. And she has won six awards for her poetry.

For two years, Evelyn lived on "the streets" in a world of drugs and prostitution recording these experiences in a journal. She left the streets in 1988 at the age of seventeen and extracts from this journal became the best-selling Runaway: Diary of a Street Kid, which stayed on bestseller lists across Canada for months.

Evelyn is now a freelance writer for the Province and the Globe and Mail as well as working on a collection of short stories. She lives in Vancouver.

A Grain of Rice

These accessible poems recount memories of family, friends and place. They make reference to events such as the war in Afghanistan or the Vancouver Olympics. Eating disorders, homelessness and personal failure, death and dying are among the issues addressed. Not only is the work thoughtful and thought-provoking, but is visual in its imagery such as in “Creamsicle orange / and KoolAid purple”.

One section consists of poems written for and about Lau’s favourite author, John Updike. These poems could inspire and provide the basis of a unit in creative writing in any senior English class.

One of BC’s best-known writers and the recipient of many awards, Evelyn Lau currently serves as the Poet Laureate of Vancouver.

Other titles by Evelyn Lau

A Grain of Rice

Fresh Girls And Other Stories

Diary of a Street Kid

Reflections on a life so far