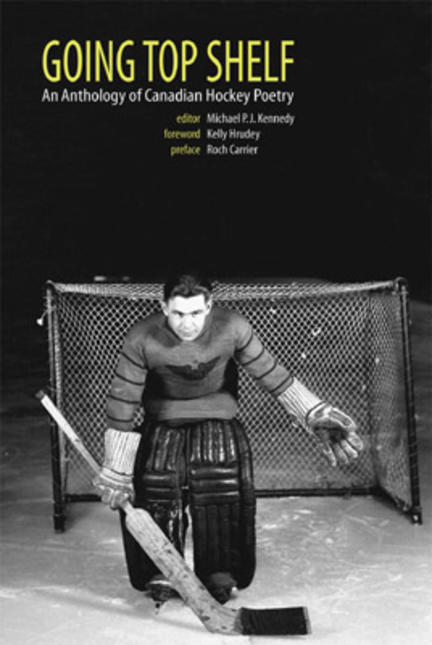 Going Top Shelf brings together for the first time in one collection some of Canada's best hockey poems and song lyrics. Included are works by such outstanding Canadian poets as Michael Ondaatje, Al Purdy, Margaret Avison, Don Gutteridge and Lorna Crozier. And for music lovers with a taste for contemporary Canadian music, this entertaining collection includes lyrics by The Tragically Hip, The Rheostatics, Kathleen Edwards, Stompin' Tom Connors, and others.

Going Top Shelf represents a cross-section of Canada 's poets and composers, ranging from 19th-century romantic poet Sir Charles G.C. Roberts to contemporary pop songstress Jane Siberry. Altogether, more than 30 authors and songwriters from across Canada reflect an intriguing diversity of forms and literary expression. Yet in all the poems, ice—or the sport played to extensively in Canada upon it—is used to express the ideas, beliefs and attitudes of this diverse group of Canadian authors.

For the poetry scholar, for the lover of good music, for the hockey fan, this is a collection to be enjoyed. Indeed, Going Top Shelf represents a literary "top shelf" of hockey poetry without equal.

A freelance sportswriter since 1979, Michael had a college sports column in the Saskatoon Star Phoenix for 10 years. His publications include hundreds of scholarly, general-interest and sports articles and others dealing with Inuit literature, Canadian studies, railroads and hockey. Michael lives in Vanscoy, Saskatchewan.

This diverse collection celebrates hockey in Canada with poems and song lyrics by more than thirty writers, including poets Michael Ondaatje, Lorna Crozier and Al Purdy and songwriters Stompin’ Tom Connors, the Tragically Hip and Kathleen Edwards. Some of the selections reflect the passage of time, others capture the excitement of the fans. Some focus on the athleticism of the players, while others recount the joys of victory and the disappointments of loss. From young boys playing hockey in backyard rinks to Olympic athletes, this collection of poems illustrates how engrained hockey is in Canadian culture. Included is a brief biography on each of the contributors.