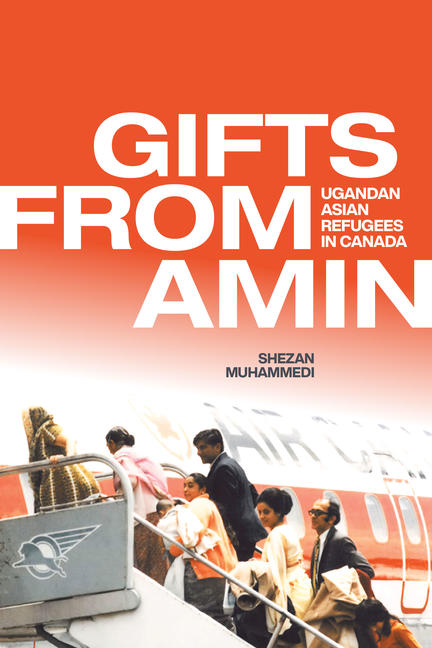 Shezan Muhammedi’s Gifts from Amin documents how these women, children, and men—including doctors, engineers, business leaders, and members of Muhammedi’s own family—responded to the threat in Uganda and rebuilt their lives in Canada. Building on extensive archival research and oral histories, Muhammedi provides a nuanced case study on the relationship between public policy, refugee resettlement, and assimilation tactics in the twentieth century. He demonstrates how displaced peoples adeptly maintain multiple regional, ethnic, and religious identities while negotiating new citizenship. Not passive recipients of international aid, Ugandan Asian refugees navigated various bureaucratic processes to secure safe passage to Canada, applied for family reunification, and made concerted efforts to integrate into—and give back to—Canadian society, all the while reshaping Canada’s refugee policies in ways still evident today.

As the numbers of forcibly displaced people around the world continue to rise, Muhammedi’s analysis of policymaking and refugee experience is eminently relevant. The first major oral history project dedicated to the stories of Ugandan Asian refugees in Canada, Gifts from Amin explores the historical context of their expulsion from Uganda, the multiple motivations behind Canada’s decision to admit them, and their resilience over the past fifty years.

Shezan Muhammedi is a policy analyst with the government of Canada and an adjunct research professor in the Department of History at Carleton University. From 2017-2022, Shezan worked for Focus Humanitarian Assistance, leading a resettlement program for newly arrived asylum seekers and refugees in Europe. His experiences as the child of a Ugandan Asian refugee have fueled his passion to help displaced peoples and vulnerable communities.