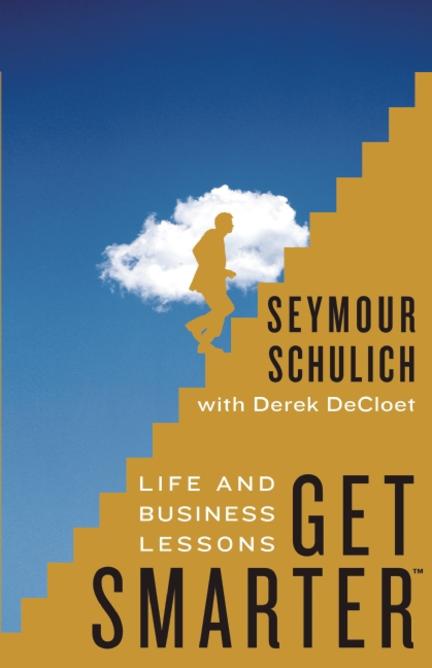 Want to know what it really takes to get to the top?
Seymour Schulich is one of the most astute, savvy, colourful?and controversial?businessmen in North America. Having amassed a spectacular self-made fortune worth more than a billion dollars, Schulich is better known for his generous philanthropic work: such as his endowment of the Schulich School of Business at York University and, more recently, his $25 million donation to the Faculty of Medicine & Dentistry at the University of Western Ontario. In the summer of 2005, Mr. Schulich donated $25 million to the Faculty of Engineering at the University of Calgary?renamed The Schulich School of Engineering in honour of his donation?followed by a further $20 million donation to the Faculty of Music at McGill University (now known as The Schulich School of Music).
Get Smarter is a lifetime&rsquo;s worth of wisdom and insight distilled into a straight-talking, no-nonsense, blunt and often very funny &ldquo;roadmap&rdquo; to success. It is meant primarily as a mentoring tool for 20- to 40-year-olds with entrepreneurial aspirations. Why?
At age 20?reflecting upon his own experience?Schulich realized he knew very little about the way the world worked. And that&rsquo;s fine. He had lots of years to find out. The problem begins around age 30, he writes, when the average person begins to think he has acquired wisdom. It is only much later that one comes to understand just how little one actually knew.
This book attempts to impart the lessons learned by a materially and, more important, relationship-successful older person to today&rsquo;s youth.
In fifty short, stand-alone chapters such universal issues as — how to make a decision, manage all types of relationships, choose a career, deal with adversity, plus key business and investing issues are explored.
The objective, he writes, paraphrasing Oliver Wendall Holmes, is to stretch young people&rsquo;s minds with new ideas, age-old truths and insights such that they never return to their original dimensions.
There are lots of books and manuals out there about how to get rich. This is the only one about how to get smarter. In business?and in life.
Praise for Get Smarter:
&ldquo;A marvelous little book...&rdquo; - Diane Francis, Financial Post
&ldquo;It could be one of the most important business books of the year.&rdquo; - Canadian Business

SEYMOUR SCHULICH, is a Canadian, self-made billionaire whose career has spanned stock brokerage, investment counseling, mining and the oil industry. He is among Canada's greatest philanthropists having donated in excess of $200 million to universities. He has also endowed libraries, medical health centers, lecture, and music halls. Over 650 scholarships are awarded annually to students in Schulich schools. He holds degrees in Science (Chemistry), an MBA and is a Chartered Financial Analyst (CFA). He holds Canada's highest civilian award: the Order of Canada.