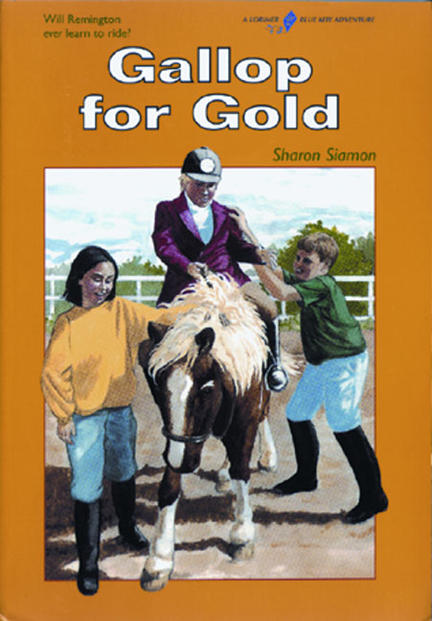 Another summer with Remington Wickers? Kiff Kokatow will go crazy. Remington spoiled his summer two years ago. He never helps, he never wants to go anywhere, and everything scares him - even a few harmless leeches.But this year, Remington has a surprise for Kiff and his friends. He arrives at Big Pickle Lake with a horse, and it isn't just any horse. It's an award-winning Icelandic horse. Too bad Remington can't ride!
At first, Kiff teases Remington to death. But when Kiff discovers gold near the old Carter mine, he loses interest in Remington. Something strange is going on near the mine, and Kiff wants to know what it is. Who could guess that when Kiff gets into trouble there, Remington Wickers is the only person who can save him!
Written for readers eight and up, Gallop for Gold is another exciting adventure by popular children's writer Sharon Siamon, author of A Horse for Josie Moon and Fishing for Trouble.

As a child Sharon Siamon had a passion for three things: horses, mountains, and books. Growing up in Southern Ontario with a family too busy for horses, Siamon pursued her dreams through books and make-believe. She says: “I never ran as a kid, I galloped, trotted, or cantered everywhere.” As an adult, she has spent her time pursuing an adventurous lifestyle, and sharing it in her writing.

The inspiration for her trilogy, Mustang Mountain came while participating in a five-day trail ride near Red Deer, Alberta. There she sat around an open fire at night listening to the wranglers talk. She was also inspired by conversations with young women who grew up on ranches.

Sharon Siamon’s educational background includes a Bachelor of Arts in English from the University of Toronto and a Bachelor of Education from Nipissing University. Siamon is now one of Canada’s most prolific writers of fiction for young readers. She has published eleven novels in Canada, two series in England, and a series in Norway. Her Sleepover Series and five books she wrote in the Stage School series under the pseudonym Geena Dare are popular across Canada and Northern Europe.

A mother of three grown up daughters, Siamon now enjoys writing in the early morning hours and then spending the rest of the day outdoors. She and her husband Jeff currently reside in Toronto with their dog, Brio.

Other titles by Sharon Siamon

Race to the Rescue

Secrets In The Sand