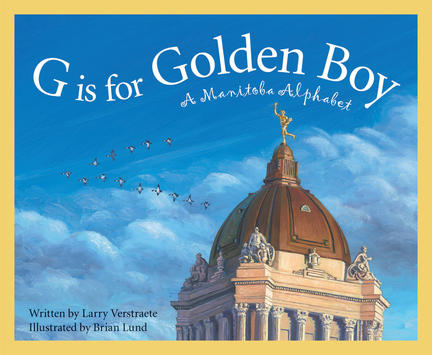 Where can one find a town nicknamed the "Polar Bear Capital of the World"? Or see more than 3,000 beluga whales? Or stand along a lakeshore and hear the sound of the Great Kitchie Manitou beating a huge drum? Visit the province of Manitoba in G is for Golden Boy: A Manitoba Alphabet and learn about these and other wonders, along with fascinating history and important facts. Readers can traverse northern Manitoba on the amazing Ice Roads, a 2,200-km network of temporary roads; attend a dogsled race at the Festival de Voyageur in St. Boniface; or take a trip back in time at the Canadian Fossil Discovery Centre in Morden. From the A of Ancient Shores to the Z of the Z-dike, G is for Golden Boy showcases the history and natural wonders of Manitoba.Larry Verstraete, a native Manitoban, grew up in the French Quarter of Winnipeg, a stone's throw from the Golden Boy. A former teacher, he now spends his time writing, visiting young readers in schools and libraries, and presenting at conferences and festivals. Larry lives in Winnipeg, Manitoba. Brian Lund recently retired from a career in digital mapping at the City of Winnipeg and now has time to indulge his passion for oil painting. He has a degree in Environmental Design from the University of Manitoba, and is a self-taught artist. Brian lives in Winnipeg, Manitoba.

Writer and educator Larry Verstraete is the award-winning author of 13 books of non-fiction, many of which focus on scientific or historical themes. An active promoter of literacy, Larry is a frequent visitor to schools and libraries where he shares his enthusiasm for science, history, and writing with students, teachers and parents.

After graduating with a degree in Environmental Design from the University of Manitoba, Brian Lund spent the early years of his career surveying in rural Manitoba, indulging his love for nature and the outdoors. Traveling, camping, hiking and cycling have always been favorite pastimes. Since retiring in 2003 from a career in digital mapping at the City of Winnipeg, he works most days in his Winnipeg studio or outdoors gathering inspiration for new artistic works. Brian is a self taught artist. He welcomed the opportunity to illustrate his first book, G is for Golden Boy: A Manitoba Alphabet.

Other titles by Larry Verstraete

'Dinosaurs' of the Deep

40 Murders and Mysteries Solved by Science

S is for Scientists