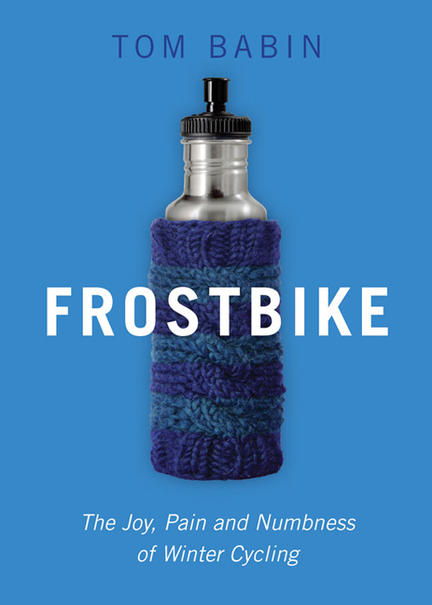 The bicycle is fast becoming a ubiquitous form of transportation in cities all over the world, making our urban spaces more efficient, more livable and healthier. But many of those bicycles disappear into basements and garages when the warm months end, parked there by owners fearful of the cold, snow and ice that winter brings. But does it have to be that way?

Canadian writer and journalist Tom Babin started questioning this dogma after being stuck in winter commuter traffic one dreary and cold December morning and dreaming about the happiness that bicycle commuting had brought him all summer long. So he did something about it. He pulled on some thermal underwear, dragged his bike down from the rafters of his garage and set out on a mission to answer a simple but beguiling question: is it possible to happily ride a bike in winter? That question took him places he never expected. Over years of trial and error, research and more than his share of snow and ice, he discovered an unknown history of biking for snow and ice, and a new generation designed to make riding in winter safe and fun. He unearthed the world’s most bike-friendly winter city and some new approaches to winter cycling from places all over the world. He also looked inward, to discover how the modern world shapes our attitudes toward winter. And perhaps most importantly, he discovered the unique kind of bliss that can only come by pedalling through softly falling snow on a quiet winter night.

Tom Babin is an award-winning Canadian journalist who has written for the National Post and for Explore and Swerve magazines. He is features editor at the Calgary Herald, where he also writes the popular “Pedal,” one of the most widely read cycling blogs in Canada. He is an avid cyclist who rides a bike to work, to the grocery store and for fun and fitness all year round (yes, even when it snows). He appears regularly on television and radio to discuss issues related to cycling. This is his first book. Babin is married and has two children. He lives in Calgary, Alberta.

This book is for cyclists, commuters looking for a change, and urban planning types, certainly, but also for any reader who enjoys a refreshing perspective.—Evan Osenton, Alberta Views

Changing attitudes about winter is difficult, as Babin acknowledges, but it’s what he sees as the biggest struggle in getting more people to see winter biking as a viable way of commuting. And so he softens, somewhat, on his views around the toughness required for successful winter cycling and starts to embrace the season as an essential part of the Canadian experience, not an enemy to be overcome. It’s this transition in attitude that makes Frostbike’s approach feel fresh and relevant. It’s not about the bike, it’s not about the lanes, it’s not about being tougher than everyone else; winter biking starts from changing our relationship with the season itself.—Jeff Carson, Dandyhorse Magazine