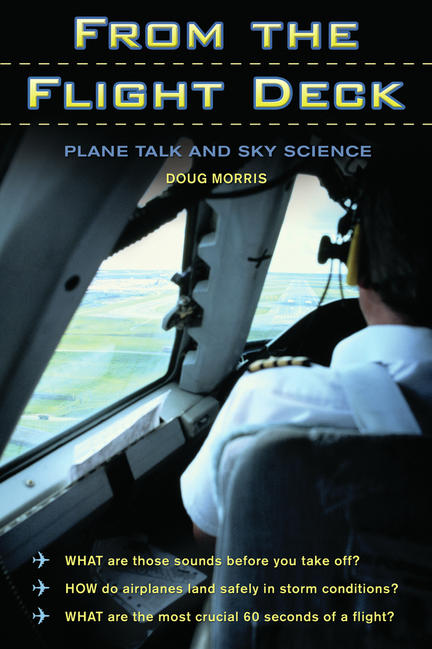 Imagine you’re sitting next to a pilot on a flight and he’s eager to answer all those nagging questions you have about air travel. Are those bumps and noises normal? Why are some take-offs delayed? What happens if there’s a storm? How does this plane stay in the air, anyway?

In From the Flight Deck: Plane Talk and Sky Science, pilot, meteorologist, and flight-school instructor Doug Morris lets you take the window seat on a trip around the world, giving you the scoop on everything from take-off to landing. He explains what you see looking out the window, what that window is made of, and how the plane is kept in rigorous flying condition. Perfect for informing the aviation enthusiast and calming the fearful flier, From the Flight Deck tells you everything you want to know about commercial airline travel: the physics of flight, how airplanes work and what they’re made of, how pilots are trained, route planning and the importance of the ground crew, turbulence, flying in storms, what the flight crew gets up to on layovers, and much more. With facts, trivia, humour, and illuminating photos throughout, From the Flight Deck is the ultimate flight companion.

Doug Morris, author of From the Flight Deck, is an Air Canada Airbus 320 captain and a certified meteorologist. He writes a monthly aviation column for enRoute, Air Canada’s in-flight magazine, as well as for newspapers and other aviation and weather publications. He lives in Oakville, Ontario, with his wife and three children.

While this holds true for most goals in life, becoming an airline pilot is no easy task. Sacrifices have to be made. There is no magic way to gain flight experience; you have to log the hours. Gone are the days when pilots were hired at age 18 or 19 with bare-minimum qualifications. Nepotism is out, with hardcore qualifications taking its place. Having said that, the aviation world is rather small; I’m always amazed by who knows whom in this tight-knit community.

A 30-year-plus veteran captain’s first airline job interview: “I was 18 years old and had relatives in flight management. I was asked whether I had any job experience. After much thought, and prodding from the interview panel, I remembered I used to have a morning paper route. The interviewers liked the fact that I had work experience. Further prodding revealed I had more qualifications for the job than I thought: I had an afternoon paper route as well.”

There are three main routes to becoming an airline pilot. The path I took — taking flying lessons at a flying club — is a popular option. But think about backing it up with postsecondary education; it makes a candidate more appealing to the employer, and it’s always good to have something to fall back on, just in case. Flying lessons at a club can be the fastest route, or the slowest, depending on how much cash and time you have on hand. Logging valuable flight time is a challenge, and many new pilots offer sightseeing flights to get an hour’s flight in while splitting the cost of renting an airplane. It’s funny to think that now I rack up nearly 16 hours in one flight, whereas when starting off in this business you’re near to begging for one measly hour.

Training in the military is the second path to an airline pilot job. In the United States, the Air Force, Navy, Army, National Guard, and Marines all train pilots. In Canada, the military pool is much smaller, and even if you enter the service you may end up flying a helicopter. (Something to think about if your goal is the airlines.)

The third route is flight colleges, and there are some great ones throughout Canada and the United States. Many are affiliated with established colleges and universities and provide a well-rounded package. For new recruits, Air Canada, like most airlines, values candidates with post-secondary education, diplomas in aviation, or a military background.

Learning to fly is expensive, and many would-be aviators give it a miss when they discover the poor wages they must endure while trying to gain flight hours. I knew of one company that allowed pilots to fly for free while they collected unemployment insurance as pay. Agreeing to fly for poverty wages just to get their derrières into a cockpit shows how passionate pilots are about their profession.

Aviation is not so much a profession as it is a disease. Because many pilots have scrimped throughout their starting years, thriftiness tends to be a prevailing attribute, or so say flight attendants. How does a pilot know he has gone too far on the thrifty scale? When another pilot notices.

Other titles by Doug Morris

This Is Your Captain Speaking

Stories from the Flight Deck