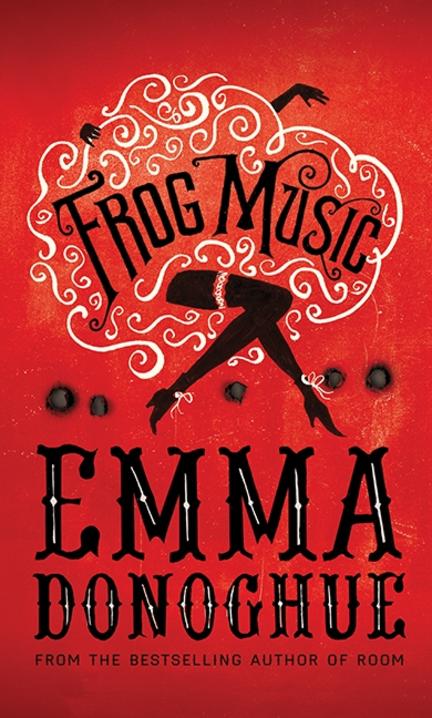 From the #1 international bestselling author of Room

It is 1876, and San Francisco, the freewheeling “Paris of the West,” is in the fierce grip of a record-breaking heat wave and a smallpox epidemic. Through the window of a railroad saloon, a young woman called Jenny Bonnet is shot dead.

The survivor, her friend Blanche Beunon, is a French burlesque dancer. Over the next three days, Blanche will risk everything to bring Jenny’s murderer to justice—if he doesn’t track her down first. The story Blanche struggles to piece together is one of free-love bohemians, desperate paupers and arrogant millionaires; of jealous men, icy women and damaged children. It’s the secret life of Jenny herself, a notorious character who breaks the law every morning by getting dressed: a charmer as slippery as the frogs she hunts.

In thrilling, cinematic style, Frog Music digs up a long-forgotten, never-solved crime. Full of songs that migrated across the world, Emma Donoghue’s lyrical tale of love and bloodshed among lowlifes captures the pulse of a boom town like no other. Like much of Donoghue’s acclaimed fiction, this larger-than-life story is based on real people and documents. Her prodigious gift for lighting up forgotten corners of history is on full display once again in this unforgettable novel.

EMMA DONOGHUE was born in Dublin and lived in England for many years before moving to Canada. She writes in many genres, including theatre, radio drama and literary history, but is best known for her fiction, both historical (Slammerkin, The Sealed Letter, Astray, Frog Music) and contemporary (Stir-Fry, Hood, Landing, Touchy Subjects). Her seventh novel, Room, won the Rogers Writers’ Trust Fiction Prize and the Commonwealth Writers’ Prize (Canada and the Caribbean region) and was shortlisted for the Man Booker and Orange Prizes. It sold more than two million copies. Donoghue scripted the film adaptation, a Canadian-Irish film by Lenny Abrahamson starring Brie Larson, which was nominated for four Academy Awards, including Best Picture. And her most recent novel, The Wonder, was shortlisted for the Scotiabank Giller Prize in 2016.

Other titles by Emma Donoghue

The Pull of the Stars

The Lotterys More or Less

The Lotterys Plus One