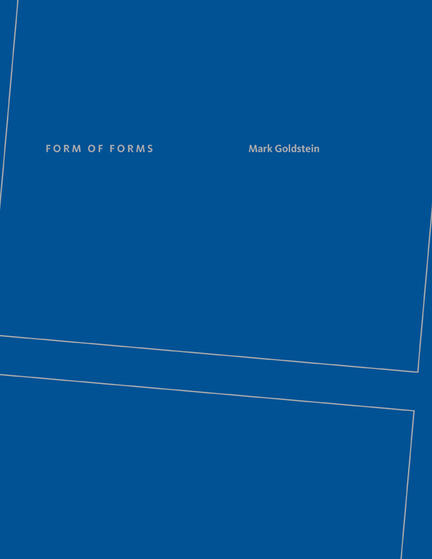 The subject of the long poem that makes up Form of Forms is, to paraphrase poet Betsy Warland: Motherloss. It deals with the emotional and bureaucratic nature of adoption from the often bewildered and fractured point of view of someone who was, as an infant, given up for adoption. Now, as an adult, Goldstein is seeking "information" on the self through the layers and fields of forms one must look through to gain access to that information. These layers and forms are what make up the framework of the poem, and the reader is brought face-to-face with the slippery nature of identity as seen throught the lens of adoption.

"Things turn up in Goldstein's work ï?? the angst that is at the heart of Celan's writing for example ï?? that comes across very different [...] than it would playing "test of translation" against Joris. And there is a sense of the source (or Ur-) text as other in Goldstein that is palpable...." ï?? Ron Silliman on Tracelanguage

I've seen any number of North American poets attempting to "do" Jack Spicer, in particular the Spicer-Lorca duet in After Lorca (1957), and when I opened the book of Mark Goldstein I wasn't sure what to expect. [...] After a few pages I began to forget where I was and became interested in the game [...] a surprising lightness and felicity animates the actual poems and letters that comprise this arresting collection, and it helps to read it aloud. ï?? Kevin Killian on After Rilke

Mark Goldstein is a Toronto writer. In 2010, he inaugurated the Toronto New School of Writing with his 12-week seminar on Transtranslation. While lecturing at EHESS Paris last year, he launched Tracelanguage: A Shared Breath, his second title with BookThug, a transtranslation of poet Paul Celan’s seminal work, “Atemwende.” BookThug published his first poetry collection in 2008, After Rilke, a set of letters in homage to late American poet Jack Spicer and a series of homophonic translations based on Rilke’s “The Voices.” From 1989 to 1999, he played drums in the indie rock band By Divine Right, whose members included Broken Social Scene’s Brendan Canning and Leslie Feist.

Other titles by Mark Goldstein

to forget you sang