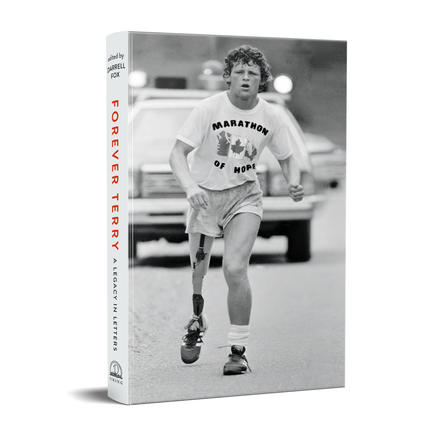 #1 NATIONAL BESTSELLER
Terry Fox defined perseverance and hope for a generation of Canadians. Forty years after Terry's run ended, Forever Terry reflects what Terry's legacy means to us now, and in the future.

To mark the 40th anniversary of the Marathon of Hope, Forever Terry: A Legacy in Letters recounts the inspiration, dedication, and perseverance that Terry Fox embodied, and gives voice to an icon whose example spoke much louder than his words. Comprising 40 letters from 40 contributors, and edited by Terry’s younger brother Darrell on behalf of the Fox family, Forever Terry pays tribute to Terry's legacy, as seen through the eyes of celebrated Canadians ranging from Margaret Atwood, Bobby Orr, Perdita Felicien, Jann Arden, and Christine Sinclair, to those who accompanied Terry on his run, Terry Fox Run organizers, participants, supporters, and cancer champions. Appearing alongside never-before-seen photos of their hero, their reflections reveal connections that readers would never have expected, and offer a glimpse into the way goodness and greatness inspire more of the same.

Forever Terry is a testament to the influence one brave man has had on the shape of Canadian dreams, ambitions, and commitment to helping others. Author proceeds support the Terry Fox Foundation, which has raised over $800 million for cancer research.

DARRELL FOX is the younger brother of Terry Fox. In late May 1980, at the age of 17, Darrell joined Terry (and Terry's best friend Doug Alward) on his Marathon of Hope in Saint John, New Brunswick. Darrell has had a long history of involvement with the legacy founded by his brother beyond spending 4 months in a smelly Ford Econoline van witnessing Terry take on the impossible. In 1990, Darrell became the provincial director for The Terry Fox Foundation in British Columbia. In 1994, he moved to the National Office in Toronto, Ontario where he served as the assistant national director and then national director of the Terry Fox Foundation from January 1996 until June 2009. Today Darrell serves on the TFRI's Board of Directors, is a Senior Advisor to the Institute and along with fellow descendants of Betty and Rolly Fox is a member of both the Terry Fox Foundation and Terry Fox Research Institute. A holder of the Queen's Diamond Jubilee Medal, Darrell continues to be involved in fundraising, story and recognition initiatives related to Terry Fox and his legacy.

Bobby Orr
Born in Parry Sound, Ontario, Bobby Orr played professional hockey for the Boston Bruins and Chicago Blackhawks in the 1960s and ’70s, and he helped lead the Bruins to Stanley Cup victory twice. His speed, scoring, and playmaking abilities revolutionized the position of defenceman and he is widely regarded as one of the greatest hockey players of all time. He was inducted into the Hockey Hall of Fame in 1979.

Terry Fox touched all Canadians in a way rarely seen in this country, and it was a wonderful experience for me to get to meet Terry and his family. That his Marathon of Hope occurred forty years ago is hard to fathom—it seems like only yesterday for those of us fortunate enough to have experienced the event.
I remember we were having lunch in Toronto, and Terry suddenly had the idea that we should compare our injured legs. So, I obliged by rolling up my pant to just above the knee and showed him my scars from multiple surgeries. He returned the favour and I got to see what he was using for a right leg. It was a very sobering moment. I remember thinking how courageous this young man must be, given the difficulty of running with that artificial limb. And for that one moment in time, my surgeries weren’t that important, and those scars that marked my knee didn’t seem so daunting.

We tend to overuse the word “hero” these days, especially as it relates to sports figures. But the fact that we still honour the memory of this great Canadian four decades later is a testament to the fact that he is someone truly worthy of the title “hero.”

Whenever I reflect on Terry’s accomplishments and consider what he achieved despite his disability, it truly amazes me. He would run—or walk or hop or limp, whatever he needed to do—the equivalent of a marathon each and every day during his time on the highways of Canada. Just consider that for a moment: a marathon a day for a young man with one leg who was fighting cancer at the same time. I once read that it took him about twenty minutes of running each of those 143 days before he was able to accept the pain that came along with the activity, and then he would simply bare down and run yet another marathon. Yes, hero is the right word for Terry Fox.

Before he ran through my hometown of Parry Sound, my dad gave me a call and asked, “What can we give Terry when he comes this way?” I told him to give him anything he thought was appropriate, so Terry ended up with my Team Canada jersey from the 1976 Canada Cup. But in truth, I wish I could have given him a lot more than just a memento.

During the 2010 Winter Olympics in Vancouver, it was my honour to walk with his mom, Betty, as we carried the Olympic flag into the stadium during the opening ceremonies. She was a wonderful lady, and anyone who had the chance to meet her or Terry’s dad, Rolly, could see the influence they had had on their son. The family support was evident, and the outcome of that support changed our country for the better.

We take a lot for granted. The everyday act of getting up in the morning, pulling on our socks, and slipping into a pair of shoes is no big deal for most people. We forget how fortunate we are in many respects. Terry’s run shone a timely spotlight on how our needs may differ from others’ and on those people who find many of the mundane tasks of living a very big deal indeed.

In those forty years since his gallant attempt to cross the country he loved on little more than one leg and a lot of faith, Terry’s journey has helped countless Canadians. It should come as no surprise that the significant funding raised through the Terry Fox Runs over the decades has had a major impact on cancer research and treatment. But perhaps even greater than the dollars and cents, Terry Fox has always represented something fundamentally important for Canadians. Terry represents hope. He could not be kept down, would not be intimidated by the task at hand, and demonstrated tremendous resolve in his attempt to run coast to coast for a cause bigger than himself. Cancer denied him the opportunity to dip his foot in the Pacific Ocean and complete his beautiful plan, but in reality, it was “mission accomplished” in so many other ways.

Now, as we celebrate this dynamic Canadian forty years after his Marathon of Hope began, let’s take a moment to reflect on what he did and who he was. Let’s make sure that the next generation of Canadian children understand the courage he showed through great adversity. His legacy must live on; he was a person whose achievements in the face of tremendous odds stand as an example for everyone. The next generation of Canadians need to have a ready reply when those pessimists among us state that “one person can’t really make a difference.” The response can be found in two simple words.