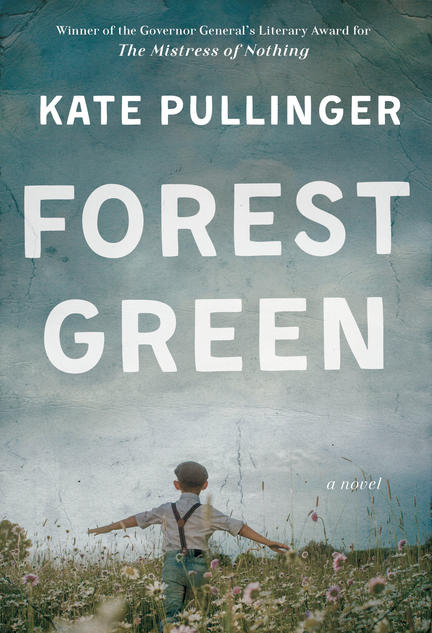 For readers of Elizabeth Strout and Anne Tyler, a powerful, heartrending novel about a man on the run from himself, by Governor General's Award-winning author Kate Pullinger.

On a rain-soaked Vancouver sidewalk in 1995, a homeless man fights for breath. Forest Green is the story of how he ended up there.

Arthur Lunn is a golden boy who spends long summer days roaming the hills and swimming in the lakes of the Okanagan Valley. But the Great Depression is destroying lives, even in Art's remote and bucolic hometown. Soon, Art finds himself caught up in a battle between the town and the vagrants flowing through it, and before long the tension reaches a boiling point.

A catastrophe follows--and changes everything. The trauma from this event shapes and haunts Art's life moving forward, from his experiences as a soldier in World War II to his reckless, nomadic working days in logging camps across British Columbia to his turbulent relationship with his one great love--a woman he cannot believe he deserves.

Painful, poignant, yet full of hope, Forest Green explores how trauma can warp our lives while love can help us to mend.

Kate Pullinger was born in Vancouver, and now lives in London. She is the author of TINY LIES, a collection of short stories, and several novels, including the Governor General Award-winning The Mistress of Nothing. She collaborated with Jane Campion on the novel of the film The Piano, and has written for film, television and radio. She teaches creative writing and new media at De Montfort University.

A kick to the ribs. Brutal. Violent. No—just the shock of waking once again. The pain low in his back, sharp then dull then sharp again.

It stung to breathe. His lungs soaked in it—the heavy wet air sitting like a monkey on his chest. A monkey?

Tied up—was he tied up? Was he tied to a tree? A skinny old pine tree? Was he in the jungle? Was Peg nearby? No. Art battled to the surface through layers of memory. A blanket was twisted around his legs, restricting his movement, and beneath that he could feel the metal grid of the doorstep through the soggy cardboard. Everything was wet except his mouth, which was dry—parched. Lips crusted and cracked. Sore. Everything. Sore. He patted his pocket—no glasses. And he had a blackeye—was it a black eye? Swollen shut. He’d hit his head, he’d fallen over and hit his head and now that side of his face felt pulpy. His fingers came away tacky with blood.

No idea of the time. It sounded like morning, seagulls and traffic. Beyond that, Art could hear the harbour, he could smell sea salt in the air. Even now, he knew he could head down to the water, walk out on a log boom, knock on the door of the harbour office, and land a job. Get out of the damned city and back to the forest. Back to the towering trees. Back to the salal with its black berries, the pillowy moss, and the deep dark quiet of the woods at night.

But not just now. Not today.

Somebody had left a burger for him in a paper bag. With fries. The smell was greasy, sickening, but it brought him round, back to his senses. If he sat up, he knew he’d start retching. Retching and shaking; sometimes he shook so bad he was his own personal earthquake. But he should eat. He knew he should eat. He couldn’t remember the last time he’d eaten. He knew he shouldn’t be lying there, tangled up in a blanket in a doorway in a puddle of—what? He should be dry, sheltered—a puddle of piss. Whose piss?

And if he sat up, he didn’t know how much control over his arms and legs he’d have. It was more than the shakes—it was as though his body had a will of its own these days. Prone to flailing, legs giving way, his insides rattling like a tin with a few coins in it. He had no cash, he didn’t hold on to cash, the junkies were ruthless and he’d been rolled a few times before he got wise. His pension—what day was it? If he could get up he could go over to that place on Hastings, they knew him down there, they’d let him wash up, help him find a bed, he’d . . .

Art rolled over onto his back. The clouds were low and the air was frigid and . . . what was that, falling from the sky? Snow? He stuck out his tongue and took a flake into his mouth. But it wasn’t snow. It was sawdust. He’d heard the volunteer workers used sawdust to keep people from freezing. When the shelters were full and they ran out of those silver heat blankets, they went around in an old logging truck and shovelled heaps of sawdust onto people while they slept, to keep them warm, to stop them dying.

The sawdust stung his battered eye. He raised his hand to brush it away.

Peg. It comforted him to think of his sister. He hadn’t seen her for a long time, not since he borrowed that money. After that, he hadn’t been able to face her, and not just because he owed her. He was waiting ’til he got his act together. ’Til he had a place, was on an even keel. He wanted to return home the big guy, full of stories, flush with money, a great wad of cash to pay back Peg and Frank, a room full of people all happy to see him, flowers for the women, whiskey for the men. But he’d been this way for a while now. How long? Down on his luck. He’d been this way.

Things would get better. They always had. He’d run into someone he knew, he’d convince someone, somewhere, to give him a job. Bussing tables, bagging groceries, sweeping the sidewalk. He’d find a camp he could call home. He’d find a jungle.

Was it sawdust? No—snow. Vancouver snow, claggy and wet, like a sugar-free slushie from the corner store, spilling from the sky.

His chest ached. The pain in his lower back pulsed as though there was something in there waking up, wanting to get out. He needed to piss. But the thought of having to get up defeated him.

“Come on, buddy. There’s an ambulance here for you.”

Art opened his eyes. There was a small crowd of people standing in the street, paramedics with a stretcher, and a young bearded guy wearing a dirty old Cowichan sweater and a John Deere cap standing right over him, one of those do-gooder types.

My name, thought Art. My name? It’s all that’s left of me. Arthur Lunn, he thought, Art Lunn, that’s me. But his mouth wouldn’t open. He was too weighed down by the cold wet air. He couldn’t speak.

"[This] novel evokes a lifespan turned paltry and ruinous by the reverberations of one childhood event. Forest Green is a spare, economical novel . . . [and an] artful portrait of steady personal erosion." —Vancouver Sun
"On a rainy Vancouver day, Art Lunn lies tangled up in a blanket in a doorway. Estranged from family, the homeless man finds solace in his memories. . . . Lyrical prose by the Governor General's Literary Award-winner slowly unravels the past that led to this present. . . . The poignant glimpses and fragments take shape to reveal how childhood trauma can set decades of misfortune in motion." —Zoomer

"Kate Pullinger renders Art Lunn's tumultuous life in episodes that have the clarity of tree rings. This slim, engrossing novel holds worlds, and its complicated central character is offered up to us with deep and unwavering empathy." —Catherine Bush, bestselling author of The Rules of Engagement, Claire's Head and Blaze Island

"I read Forest Green in one go, gripped and charmed and moved by its Everyman logger protagonist and all he lives through." —Emma Donoghue, bestselling author of The Wonder and Room

"At the same time intimate and sweeping, Forest Green tells the story of a single man's life, and the history of a family, an industry, a nation. Pullinger expertly and sensitively reveals the different stages of her character's life, and the way it has been shaped by both inside and outside pressures." —Johanna Skibsrud, award-winning author of The Sentimentalists and Island

"Childhood wonder and promise collide with a day whose lifelong repercussions Springsteen might have penned had he decided to turn to prose and reimagine Nesbit's The Railway Children. Pullinger's new novel is a freedom song for the working man." —Kathleen Winter, #1 bestselling author of Annabel and Lost in September

Other titles by Kate Pullinger

The Mistress of Nothing

The Collected Works of Kate Pullinger

Where Does Kissing End?

My Life as a Girl in a Men's Prison

The Last Time I Saw Jane