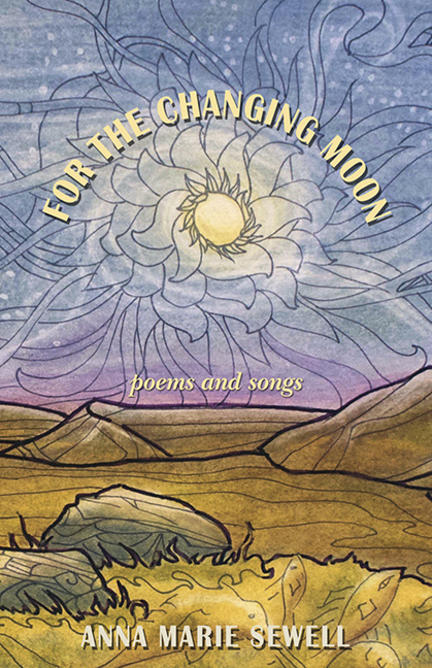 At a time of cultural change for Indigenous people that feels relentlessly tidal and epochal, For the Changing Moon: Poems and Songs records the ebb and flow of what it is to live here and now in Canada, as a woman, an indigenous woman, a culturally mixed woman, a daughter, a mother, a peace-seeker and a warrior.

The book includes work visually designed for the page, and work composed to be chanted, sung, and spoken amongst ourselves. We are asked to experience it as a record of the shifting times, and understand how the mood of the world can strike change in an individual, sometimes, like a rogue wave; and other times, slowly and methodically like a lunar tidal pull.

If you can do this Can you, Can you do this?
If we can do this, Can we? Can we do this?

Anna Marie Sewell's poems court performance as they incorporate the energy of slam and employ the beat structures of chant. They encourage us to enter their spells and incantations always built with an ear for sound and with an eye for images of dream and wonder. Her invite and challenge is clear: “Come lovers of language, seekers of change, moon-mad prophets, come. Read and share these poems and songs, and answer them back with your own.”

From this specific place, Canada, during a moment of global sea change, these poems and songs reach for the moon-mad natural soul in all of us, that part of all of us that lives to follow the Great Song.

Anna Marie Sewell is an award-winning multi-genre writer/performer, whose career has centred around collaborative multidisciplinary work, including Ancestors & Elders, Reconciling Edmonton (which featured the first ever Round Dance at Edmonton's City Hall), Braidings, Honour Songs and Heart of the Flower. As Edmonton's 4th Poet Laureate, Anna Marie created and curated The PoemCatcher public art installation. She founded and ran Big Sky Theatre, a three year training and performance project producing original Aboriginal (it was the 90s) theatre with urban youth. She is also a founding member of the Stroll of Poets, which has provided an entrée into Edmonton's public poetry community since 1991.

Humane is Anna Marie's first novel. She drafted it with support from an Edmonton Artist Trust Fund award, and finished it as part of her tenure as MacEwan University's 2019/20 Writer in Residence, a gig which has also entailed performing with a 24 piece orchestra, co-producing 2 multilingual poetry&song showcases, and collaborating with an array of artists and educators. She lives in Edmonton, Alberta.

Excerpt: For the Changing Moon: Poems and Songs (by (author) Anna Marie Sewell)

Real Indians, the shape-shifting kind, They’re gone
now, if they ever were more than Fantasy. And that’s the tragedy
those powers lost to us, look at us now
we’re not those people, we can’t do that, we’ve only got the stories.
Well, I’ve told a few myself, from time to time
and here’s one now: my father was a shape-shifter.
He was part of the Constitutional entrenchment of Metis as a People.

That might not count. You don’t think so? Maybe
you wanted to hear it like in conversations
late at night, all shivering round the table
some smoky old story about those people
who could turn into dogs, or bears, or flying beings.
No, I never saw him
walk as a bear, or a dog or in feathers and wings
but I saw him on TV, and what about that?

On TV, we spied him by his hat
that one he always wore for meetings
ironically, a cowboy hat
Dad at the tables in Ottawa in 1982
committee committed, Metis Delegation
shifting the shape of our nation.

pictures pinned
on a social media account
calling to account those who have for too long
turned away, silenced
the ones who knew all along
because we were the victim pool
later, the number is raised
to the possibility
4000 and more? too many to be sure

252
files the national broadcaster
obtained the rights to share
so that their names, faces, known
stories of them as people
might mean enough
for it to be enough
of impunity

2014
years after the assigned date
of the resurrection
blamed for all these works
of conquest, works of war
2014 years until
the day of reckoning, one of many
that hopes to bleed the wounds
from hands and feet and tender sides
of our body politic
the crown of thorns
first nations suicides and poverty

How far will we go?

Other titles by Anna Marie Sewell